In the French Radiesthesia research into invisible waves, one of the fascinating areas of study was the “Waves of Form”, also known as Shape-Caused Waves. In this research, the hidden Vibrational Science embedded inside of what we think of today as “Sacred Geometry” was revealed.

One of the most interesting of Turenne’s texts is his 1942 book Scientific Methods for the Control of All Natural Waves. It is packed full of interesting new research into shapes, numbers, ancient and new forms of the Chinese Ba Gua, and other topics; while also being somewhat less technical than many of his other works.

Here are a few samples of Turenne’s discoveries regarding “Waves of Form” described in this 1942 text. 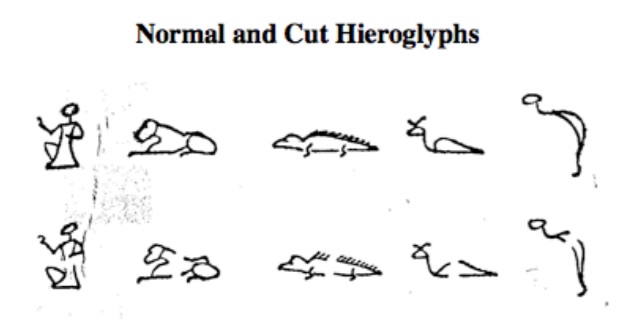 Turenne examined a mystery from Egypt; that in some locations, the ancient carved Hieroglyphs had a chisel taken to them in an earlier time, cutting a section out of the continuous line which created the original shape of the Hieroglyph. Why was this done?

Turenne discovered that he could pick up a specific energy wave coming from the regular, full form of the Hieroglyph (for this he used a system based on the “Series Point” method from Abbe Mermet.) Turenne discovered that this energy wave was cancelled in the Hieroglyphs which had the chisel cut made through them. Not only were the Egyptian Hieroglyphs created with an understanding of the energy effect their shapes created, it was also understood (by others perhaps opposed to the working of the Hieroglyphs) that making a cut through the form (so that the boundary lines making the shape were not longer continuous) would neutralize the energy they emitted.

Turenne regularly used another technique we have not yet mentioned in this course; he put Radium salts in a wooden block, and then placed that around things he was testing with Radiesthesia. The strong emanation from the Radium salts acted to greatly amplify the subtle vibrational fields of the test subject, making them easier for him to test. He found that a spiral drawn in a precise way would create the same strong broadcast of energy as Radium salts, and could be used for the same purpose; but this drawn form does not have the toxicity of radioactive substances. This pattern is shown below, along with a section from our English translation of the original text. It requires exactly 7 turns of the spiral — no more, no less — to create an energetic broadcast wave similar to that obtained with using a radioactive substance, but without the toxicity. This principle would later be clarified by Dr. Ibrahim Karim’s work on the “Power of Number” in BioGeometry: that forms containing exactly 7 elements can create a broadcast of the “Negative Green” carrier wave energy quality, a vibration which we will describe in the later section on the research discoveries of Andre de Belizal. 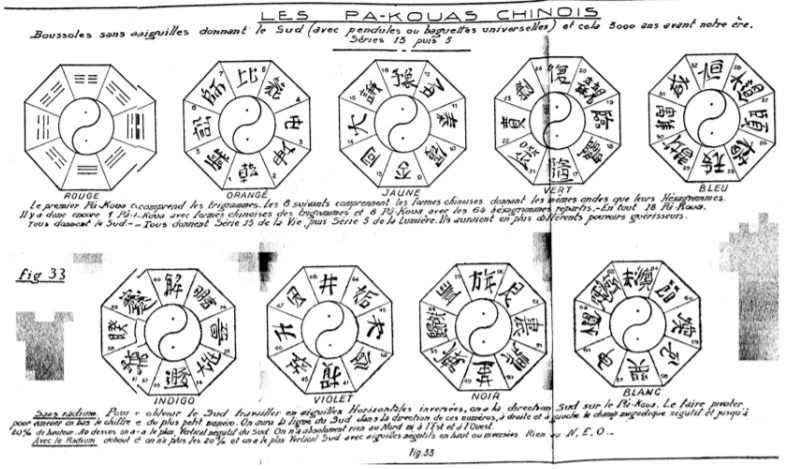 Turenne examined different forms of the octagonal Chinese BaGua symbol, and discovered it had specific vibrational bands present based on what forms or characters were placed in the 8 sections around the Yin-Yang symbol in the center.  The illustration below from his 1942 text shows the BaGuas which produced different invisible radiations connected to the color bands.

He also examined in this texts some of the elements which appear in Indian iconography, including with representations of the Chakras, the Shiva Lingam, and other forms.  He then applied his study of the Indian and Chinese forms to create his own original BaGuas, which contained in their design a combination of Chinese and Indian elements so that the new BaGuas radiated highly beneficial energy effects.

Turenne tested the vibrations from a number of dots representing a particular number — for example four dots for the number four — against the the vibrations of the shapes of the Arabic numerals representing that number. He discovered that their vibrations were identical in many ways, indicating that the persons who created the Arabic numerals had found the shapes for the numerals to match the actual number vibrations… Continued in Part 1 of the Universal Vibrational Spectrum Course.