Build The Spirit Radio That Creeped Out Tesla Himself

“My first observations positively terrified me as there was present in them something mysterious, not to say supernatural, and I was alone in my laboratory at night”
– Nikola Tesla, 1901 article “Talking With The Planets“ 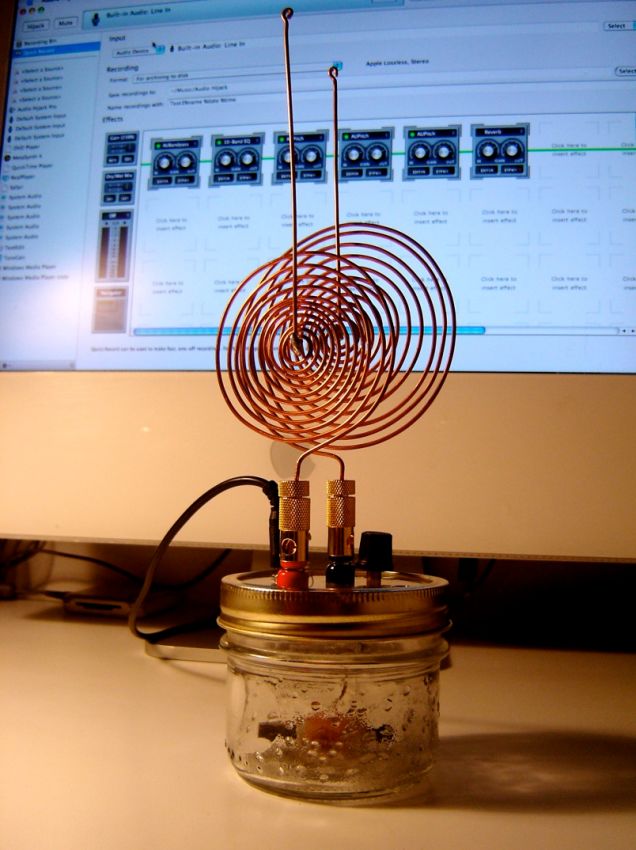 Tesla’s Spirit Radio uses a simple crystal radio circuit connected to a computer sound-in jack to generate spooky sounds from all kinds of electromagnetic sources. As you will see, it creeped the hell out of Tesla himself.

“My first observations positively terrified me as there was present in them something mysterious, not to say supernatural, and I was alone in my laboratory at night.”
– Nikola Tesla 1901

“The sounds I am listening to every night at first appear to be human voices conversing back and forth in a language I cannot understand. I find it difficult to imagine that I am actually hearing real voices from people not of this planet. There must be a more simple explanation that has so far eluded me.”
– Nikola Tesla 1918

Is it science or the supernatural? Check out the video to see what the radio is capable of and, if your are so inclined, build one and decide for yourself. Needless to say, this would be a hit at a Halloween party. Hit the link for a complete set of instructions. 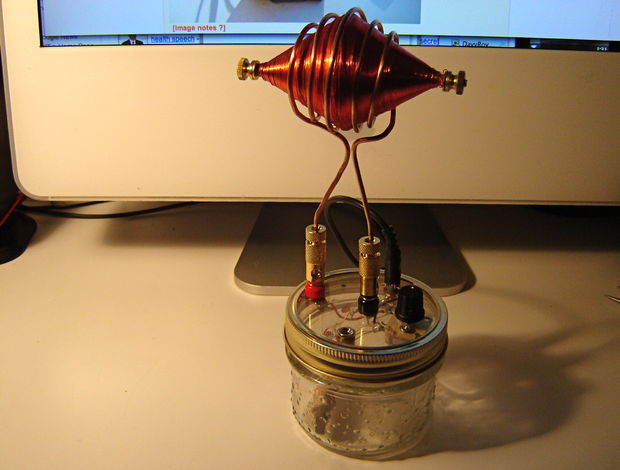 Have a look at the Crystal Quantum Radio devices of EJ Gold that helped inspire this instructable:  http://www.yoyodyneindustries.com/

“My first observations positively terrified me as there was present in them something mysterious, not to say supernatural, and I was alone in my laboratory at night”
– Nikola Tesla, 1901 article “Talking With The Planets”

The Spooky Tesla Spirit Radio is more than just a crystal radio circuit in a jam-jar. It’s a sound maker that plugs in to a computer, and makes awesome spooky sounds by responding to electromagnetic fields or light sources in real time.

You can listen to AM broadcasts with this radio, but it was made to have fun with in other ways. (Besides, AM radio wasn’t exactly what Nikola Tesla was interested in…in fact, he believed it was a waste of energy to transmit and receive Hertzian waves!)

By using a program like Audio Hyjack Pro (Mac), the radio’s output is tweaked at the computer to give some great real-time sound effects…and you can record them at the same time. 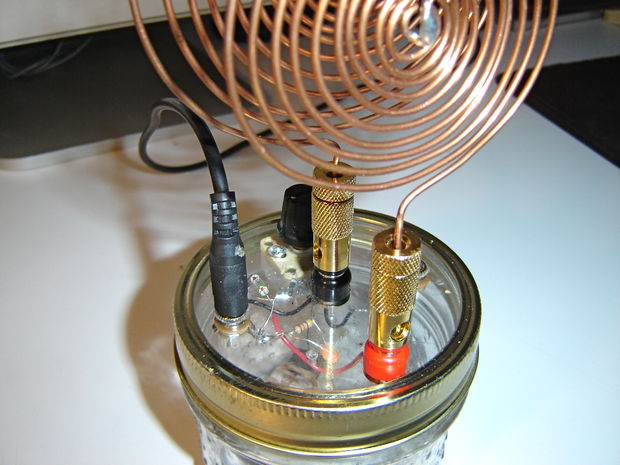 In the following accompanying movies, I show how the Spooky Tesla Spirit Radio reacts to lightning, radio frequencies, the light spectrum, the computer screen, RF pulses, electromagnetic fields and more!

In the following video, the Spooky Tesla Spirit Radio is used to give voice to a Mac Hyperspace screensaver! The simple crystal circuit is apparently sensitive to the screen synchronization RF frequencies, and so it provides awesome background sounds…check it out:

The next movie shows “Spooky”, the radio, beside a Dancing Ghost homopolar motor. The motor emits electromagnetic waves that are picked up by Spooky’s antenna coils, and we hear the results translated through computer software in real time…spooky!!

Here’s a movie of the action in the new PC game “Tesla”, featuring the Spooky Tesla Spirit Radio;