About 1930, I decided to try an experiment of conducting Chlorophyll Energy over wires. I had been conducting Eloptic Energy over long distance via wire.

A wood platform was installed on the south side of the house about six feet above the ground in order to get the desired potential of energy which increases with distance above the ground.

Having some wooden cigar boxes available, I cut boxes apart and cut pieces and made eight boxes that were 2″ X 2″ X 4″ although any size boxes will work.

Aluminum foil was placed on the bottom of seven boxes inside so as to be in contact with the soil.

Similar pieces of foil were placed on the underside of the lid of each box.

See Figure #2 (on the right) for details of the box construction. 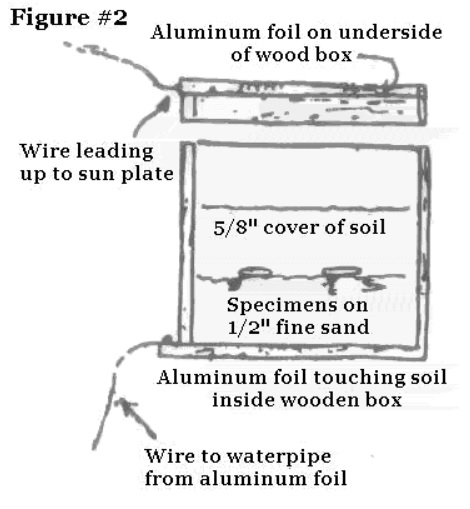 Refer to Figure #1 which shows a ‘side’ view of the installation.

Figure #3 shows the system of connections. 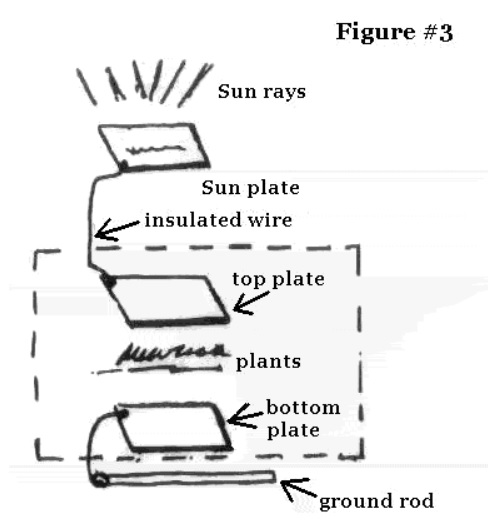 Seven plates were placed on the platform so as to pick up energy from the sun and a wire was connected to each plate and extended down into the basement, each box having the top foil plate connected via wire to a plate out on the platform in the sunlight. The eighth box had no connection to the outside, it being the ‘control’.

Some dirt was screened and 1/2 inch of dirt placed in each box. Oat seeds were selected, all of uniform size and planted in two rows of 5 seeds spaced in each row, the 1/2″ of dirt was placed on top in the box. The same amount of water was added to each box as needed from day to day.

All of the seeds sprouted about the same time. Then we noticed that there was no chlorophyll in the 10 plants in the control box. All of the boxes connected to outside plates had plants with much chlorophyll.

Very soon, the plants grew too tall for the small amount of ‘head room’ in the boxes so each box was equipped with a spacer to raise the top of each lid up about 3/4″.

The boxes were placed on a shelf in the end of the basement where there was little light, with no windows at that end. Also, the shelf was kept dark by a board placed in front and another on top to exclude all light. The plants were dark all of the time except when they were examined by a flashlight.

A friend tried to duplicate the experiment, but did not follow all instructions. Their basement was only about 3 feet from the basement floor to the ground level outside.

Instead of placing the outside plates above ground 6 feet, they laid on the ground, thus they did not have the potential differences between outside collector and inside boxes and the experiment was a failure. Also, there was a window near that let much light into where the boxes were placed.

Anyone who expects to duplicate an experiment should be sure they know all the factors and that they follow the instructions exactly without any substitution or change. And as to changes, if you are trying to get a special result and are trying out several methods or ideas, one of the cardinal points to doing good work is to make just one change at a time.