Is a cubic model fractal? 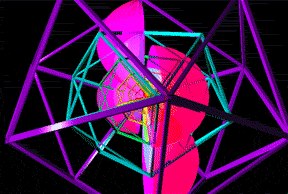 Nassim’s theresonanceproject.org Films- all conclude the universal vacuum is A FRACTAL- BUT Say That Vacuum IS TETRAHEDRAL.. The implosion group model- with Dan Winter- explains in detail WHY the TETRA / CUBE – “The Matrix” is in fact opposite to fractal…This article explains the wave mechanics which prove: The Tetrahedron (Tetra – Octa – Cube) is NOT a Fractal Field.

First- we would like to say – we particularly LIKE Nasseim Haramein, and his – theresonanceproject.org – It is worth noting how many people he has succeeded in getting interested in the wave nature of consciousness. He grew up with passion to understand waves from the inside out. His current work to develop field symmetries for gravitational research – is likely highly significant. We wonder however if he has actually taken the Golden Ratio path in account as the optimal way of creating optimal centripetal corriolis forces. Perhaps understanding WHY the tetrahedron is NOT fractal- from an wave field perspective- will help.

Nassim does a good job of visualizing the geometry inside the nested tetrahedron – but he really confuses himself and his viewers- in his DVD series – by suggesting for his main point- that the wave nest inside a tetrahedral array is FRACTAL. This is a confusion – worth sorting out because it relates to so many ‘fields’ (both energy fields and conscious fields).So – if we are to prove that a TETRAHEDRAL array of waves is NOT a good example of fractal – then we must deal with at least some of the definitions of fractality. This is very relevant so the core of our work – suggests FRACTALITY is the clear wave symmetry solution to most ALL of the problems of science AND culture. (film and detailed links: goldenmean.info/fractalworld ).

I vividly remember quizzing Dr. Constantine Korotkov about how he measured FRACTALITY in clinical medical aura diagnosis (GDV / kilian) – which was one of his primary variables to measure human PEAK PERCEPTION. Essentially – checking for self-similarity in the SHAPE of the BOUNDARY CONDITION of the human aura print – was like checking for which part of the sea-coast of a country could support the most beaches- according to how fractal or maximally folded was the edge or boundary. You can see how the amount of information in a membrane or boundary – would increase with the amount of total surface or boundary AREA. In this way- for example – Dr Bruce Lipton – correctly teaches that not only is the membrane the BRAIN of the cell, but if the membrane is FRACTAL (more folded surface) – then it has more memory and more brain. The brain itself is often described as an excellent example of maximization of folded surface. So.. it is easy to see how your aura becomes more INFORMED the more its surface is folded.

The principle here is that as the folding on a boundary (in 2D) or a membrane (in 3D) is increased- towards a perfect limit of fractality- its SELF-SIMILARITY also increases. This means – that essentially the perfect fractal boundary in 2D is always going to look like a fern. We need to stress here – that the REASON that fractality AND self-similarity were useful variables to measure in each of the examples – was because this was an indicator or measure of successful COMPRESSION.

Take another example – consider Dr.Ary Goldberger’s – famous measure of the FRACTALITY of the fibres which electrify the heart – and the FRACTALITY of the branching structure of the ALVEOLI of the lungs- where you catch the fire of breath. His mathematics to quantify self-similarity are a useful study. He was on an excellent intuitive track here – because he was getting close to the physics – for HOW the heart and lung manage to extract the wattage of power they do – from the gravity field. If you interview any of the friends we know well – who after studying with Jasmuheen – live very well for years with NO FOOD- you come to know a little about HOW they extract wattage- power from gravity. They do not get their kilowatts from metal buildings in electrosmog cities- no their course is clear- you get voltage (‘chi’) from gravity by quiet time – embedded in NATURE. What Dr. Goldberger does not understand is WHY a FRACTAL FIELD around the heart – is required for the heart to gather its power. The answer – of course – is BIOLOGIC ARCHITECTURE- ( goldenmean.info/architecture )

It is precisely to make this clear – that we need to explain WHY the TETRA/ CUBE / OCTA is NOT an example of a fractal field.In all of the above examples of NATURE using fractality – create LIFE in general – do you see TETRA or CUBE as the primary geometry? No never.Why?In fact when your doctor is checking your tissue cells for cancer – the SPHERE -hex/cube shape is exactly how he knows which cells are MOST likely to be cancerous! ( analysis: goldenmean.info/cancer ) – Healthy cells are most often an egg shape optimized by golden ratio – almost never spherical – this is because to be SOCIABLE cells / instead of cancerous Asocial cells – they must be charge projective and receptive- like an egg – not a sphere.

(Though as Valerie reminds me – blood cells in some cases are exceptions to this rule. Healthy red blood cells are spherical – but their ability to stand healthily on their own DOES depend on electric fractality – in the same way the gold atom – and the hydrogen atom – becomes stable by itself in a fractal electric field.)

Why is the sphere like the cube / hex energetically? This is because when all radii are the same – the internal interference of the wave fields- produces the same geometry as the hexagram- where the radius = the edges. This is not the case in the pine cone or egg shape- which is precisely why eggs are almost never spheres- for very good electrical reasons. They need to breathe the charge called LIFE- by imploding centripedally – something a sphere rarely does.But we really need to get the essence of our evidence

WHY the tetra is NOT a fractal.

We know there could be many definitions of FRACTALITY. They could include- self-similarity, ability to zoom in forever visually- etc. Mathematics has very evolved language here. We would like to make the case here however- that THE HIGHEST AND MOST SIGNIFICANT AND DEFINITIVE DEFINITION OF FRACTAL – is ABILITY TO COMPRESS PERFECTLY.Mathematics is clear – the ONLY form of infinite compression IS fractal. Electric field theory has been painfully slow to follow suit to recognize what a FRACTAL ELECTRIC FIELD would look like. We argued that the stellated dodeca- icosa- is the perfect 3D fractal electric field – at goldenmean.info/gravitycode , goldenmean.info/gravitycause . We suggest the pure principle is that when you extend the edges of the dodecahedron straight out – infinitely nesting dodeca/ icosa/dodeca – every single node point in the inPHIknit nest has a X,Y&Z coordinate values which are simple whole number multiples of Golden Ratio. This means that distance to center line – fits this animation (see bottom):

We say this is why that stellated dodeca is the essential symmetry of DNA, Earth Grid, Zodiac, Universe (as announced by Nature Magazine), City of Revelation, Ezekiels Wheels, Merkaba, Star Mother, etc. etc. For physics this then is the symmetry of the Poincare’s S3 gravity, and Palladium – key to cold fusion. We might mention that in order for Nature Magazine’s cover announcement that the UNIVERSE is DODECA – AND for New Scientists magazine cover announcement that the UNIVERSE is FRACTAL – BOTH to be correct.. then – the TETRA is NOT the best geometry of fractality.

Again – here we must see deeply WHY the TETRA is NOT fractal. Our argument so far – is that the most important definition of fractality for field theory – and therefore all of physics – IS the ability to enable PERFECTED COMPRESSION.

It is simple: PERFECTING COMPRESSION is the most important REASON FRACTALITY is interesting / useful.Obviously – perfecting compression is the real story behind – computing, roses, consciousness, DNA.. not to mention Einsteins insistence that perfect infinite (non-destructive) compression was the electric field solution to the unified field. I often meditate on how different the world might be today – if Einstein had been told what a fractal is.

SO- feel free to argue this point – but I am staking my intellectual reputation on my hypothesis that PERFECT COMPRESSION is the final definition of what is FRACTAL versus what is not. I say this because I strongly believe the universe is one single compressible unified field of waves of charge, and the geometry which allows those waves to compress perfectly and implosively – which is clearly – FRACTALITY – is the key to making ALL the centripetal forces we call GRAVITY, CONSCIOUSNESS, SELF-ORGANIZATION and LIFE ITSELF!