Dielectrics (extracts from the webpage http://ufophysics.com/dielec.htm)

A dielectric is a non-conducting material which has the unique ability of preventing electrical conduction but is at the same time capable of absorbing electric charge. Indeed, it will carry on absorbing charge until its saturation capacity is reached, whereupon, if its power source is still connected and still trying to pour more electricity into it it will rupture and a path will be created through it for current to discharge. This phenomenon, called dielectric breakdown is most certainly to be avoided for it renders the solid material useless thereafter. If, however, before it ruptures the charge accumulated within the dielectric rises toward its saturation point and reaches a level of voltage higher than the voltage of the charging circuit, then the dielectric’s voltage will discharge itself (just like a short circuit – very violently) back through the power source. 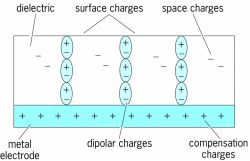 From the very earliest days of electronics discoverers such as Faraday, Maxwell, and Lord Kelvin found that dielectrics didn’t merely insulate; and that even the humble Leyden jar condenser was found to hold significantly more electricity, surface area for surface area, than a flat-sheet condenser with air between it’s sheets – because it had a dielectric of glass sandwiched between its electrodes. Dielectrics were found to exhibit what was then termed ‘elastic stress’ which enabled its structure to absorb unusually large quantities of charge.

Thomas Townsend Brown, the pioneer of electrokinetics, or as he called it the ‘electrogravitic’ effect, discovered that certain dielectrics perform much better when charged up at a slower rate of oscillation than others* and it was he who originally devised, in 1958, the science of ‘doping’ dielectric materials with higher-mass particles (the higher atomic-mass particles he used were lead oxide granules) to enhance the dielectric’s electric charge absorption. To understand how this occurred, if you can imagine that such particles create ‘interfaces’ with the main structure of the dielectric and that opposite polarity charges accumulate at each side of those interfaces, then what Brown invented was a cluster of mini capacitors held inside the dielectric body (which in itself was connected inside a capacitor).

[* NOTE: TT Brown first patented this idea in 1928 (British 300,311), and in his US patent 1,974,483 of 1934 he wrote of the kinetic reaction he had discovered, “It is evident from consideration of [the figures] that any type of dielectric under the conditions revealed therein produces both direct and reactive forces as shown. These forces, however, are different with dielectrics of different physical characteristics and are roughly proportional to the massiveness.”
Indeed, his research into ‘massiveness’ was a key element of Brown’s work through to the 1950’s. He wanted to continue the work of C.F.Brush, a physicist who had discovered certain anomalies between mass and gravity in certain materials, and had concluded that;

And another extract from http://ufophysics.com/elstress.htm

A ‘DIELECTRIC’ is defined as a material which has the unique ability of absorbing electrical energy and ‘charge’ without ordinarily passing this energy on to neighbouring materials. Some dielectrics are able to absorb enormous quantities of electrical energy (also referred to as ‘ELECTRIC STRESS’) without discharging, provided that the energy is fed into the dielectric slowly and at low potential. Still others can be charged and discharged at extremely high potential at a rate of several thousand times each second. Townsend Brown concerned himself principally with this latter type. Using just such a dielectric, Brown constructed disc-shaped (or saucer-shaped) condensers, and, by applying various amounts of high-voltage direct current, witnessed the [Biefeld-Brown ² ] effect in action. With the proper construction and electrical potential (in the kilovolt range) the disc-shaped ‘airfoils’ were made to fly under their own power, emitting a slight hum and a bluish electrical glow as they did so. More scientifically, perhaps, this process of ‘flight’ might best be described as ‘motion under the influence of interaction between electrical and gravitational fields in the direction of the positive electrode’.

In 1953, Brown succeeded in demonstrating in a laboratory setting the flight of disc-shaped airfoils 2 feet in diameter around a 20-foot-diameter circular course. The process involved tethering these saucer-shaped craft to a central pole by means of a wire through which the necessary direct-current potential was supplied at a rate of 50,000 volts with continuous input of 50 watts. The test produced an observable top speed of an amazing 17 feet per second (about 12 miles per hour).

Working with almost superhuman determination and at great cost to his personal finances, Brown soon succeeded in surpassing even this accomplishment. At his next display, he exhibited a set of discs 3 feet across flying a 50-foot-diameter course with results so spectacular that they were immediately classified. Even so, most of the scientists who witnessed the demonstrations remained sceptical and generally tended to attribute Brown’s motive force to what they called an ‘electrical wind’ – this in spite of the fact that it would have required a veritable ‘ELECTRIC HURRICANE’ to produce the lift potential observed ! Nonetheless, pitifully few ³ gave any credence whatsoever to ideas that the [Biefeld-Brown] effect might represent anything at all new to the world of physics. Government funding was sought to enable the work to continue, but in 1955, realizing that the money would not be forthcoming, a disgruntled Brown went to Europe in hopes that perhaps he might be able to generate a little more enthusiasm there.

Although demonstrations were given first in England, it was on the Continent, under the auspices of a French corporation, La Societe Nationale de Construction Aeronautique Sud Ouest (SNCASO), that things really began to look promising. During a set of tests performed confidentially within the company’s research laboratory, Brown succeeded in flying some of his discs in a high vacuum with amazing results. Brown was ecstatic, for not only had he succeeded in proving that his discs flew more efficiently without air, but he had also shown that the speed and efficiency of his craft could be increased by providing greater voltage to the dielectric plates.

(see the original pages for the complete text on TT Brown)

Electrets are unique, man-made materials that can hold an electrical charge after being polarised in an electric field, much as a piece of iron can be magnetised after being exposed to a magnetic field. Researchers knew that as early as 1919 Japanese navy Captain Kawao Wantachi had been able to create an artificial membrane by mixing beeswax with Brazilian palm gum [usually carnauba wax] and resin [rosin]. The resulting material was then polarised in an electric field, and had maintained its charge for a long time afterward-resulting in the world’s very first electret.

Mototaro Eguchi in 1925 developed a method to make an electret according to the work of Kawao Wantachi. (see the pdf links at the end of the page).

Between 1890 and 1930 the various tries and works where made with a half-wave rectified AC current (basically, with just a diode rectifier in one of the cables).

Pure DC is always required to finally fix the charge.

Since 1919 until 1970’s thermal method was used (DC voltage applied by electrodes to heated samples).

The original method, using dipolar polarisation with space charge is linked to the “two-charge theory”, applicable to waxes and to polymers like Mylar.

Electron beam method (low-energy beams of about 20KeV in vacuum) was used for controlled charging and for research application from the 1960’s to today.

Nowadays (since 1970’s), the usual method is to use polymer materials. Many modern electrets have only space or surface charge (like Teflon or Polypropylene electrets), but no dipole polarisation. The modern electrets need few kV (3 to 10) to be made. The voltage is applied through external electrodes to a piece of Teflon foil, 25 to 100 microns thick (preferably metalized on one side). Or, better a corona discharge operates with a needle voltage of 5 to 10kV. Then the non metalized side of the Teflon is charged. Polypropylene as well as Mylar can be used.

The current required is usually less than 1 mA, since the materials are highly insulated and the current is therefore very small.

Concerning the ratio of applied voltage and output voltage :

It depends on the charging process and on many other parameters. In corona charging, surface potential of 2kV can be easily obtained with a needle voltage of 5 to 10kV. With contact charging electrodes, one could expect the resulting voltage to be about 50 percent of the applied voltage, up to about 1 to 2kV. No general rule can be given, since many parameters enter.

According to the various elements given above, we would like to study more the carnauba wax electret (dipole) and the way to make it.

A source of variable high voltage as well as variable current should be the best to make different tests.

The range of voltage should vary up to 20kv with amps up to 5mA (just to settle the limits). Though the best results should be obtain between 5-15kV and 1-3 mA.
A laser power supply could be used (sometimes up to 7000v) or a photocopier supply, but be careful for the external casing constitutes one pole. Be sure to use good groundings.

It is important to use a clean source of DC and not pulsed DC. So perhaps the best could be to use a HV power supply powered by batteries. It depends on the quality of your HV DC source. That’s why it could be useful to test the output voltage with an oscilloscope, using a HV probe to divide the high voltage for the oscilloscope.

A wax electret is usually thick and therefore the current must flow through and stress it. That’s why 1 to 5mA should be tested. A too small current would only flow on the surface of the electret, not through it. That’s the case for instance with a Van de Graaf generator (about 200kV-400kV at 50microA). But test carefully a current higher than 3mA for it could cause “molten eruption of wax”, which is dangerous. It could be logical to say that the thicker/denser the electret, the higher the current needed.

It should take weeks or even months to see a homocharge developed in the electret. An heterocharge should appear first… so, be patient!

Once you have your HV DC variable of fixed power supply, you can use the Eguchi method (see links below) Oleg Jefimenko (idem) made a lot of wax electrets to develop electret motors. He made a lot of tests and suggested the following proportions : 45 percent carnauba wax, 45 percent water-white rosin and 10 percent white beeswax.

Then, you have now all the needed information to test the TT Brown “batteries”…