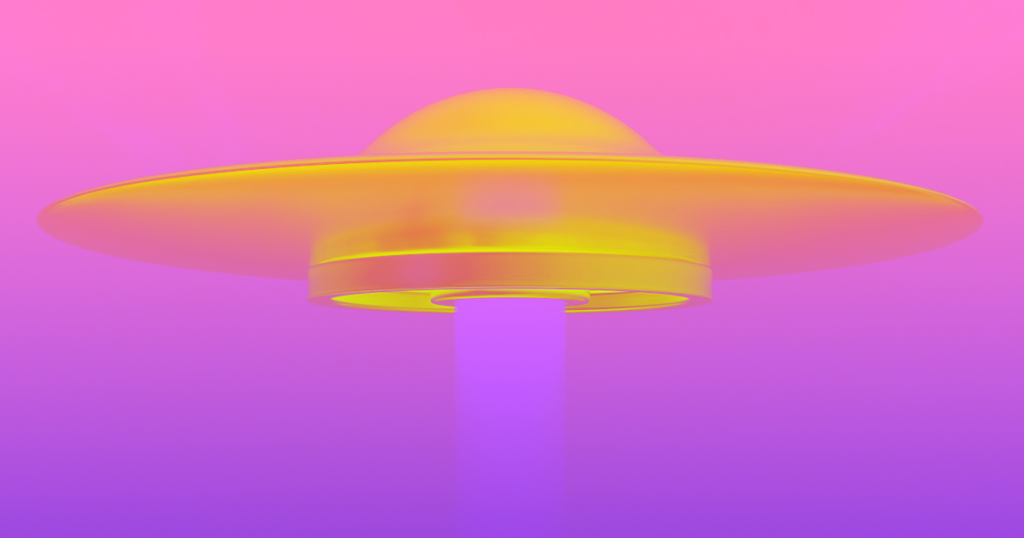 The following paragraphs are intended as the shortest possible synopsis of the factors involved in this interpretation. The supporting data and reasoning are extensive and can be found in various publications of the Borderland Sciences Research Associates.

(1) The aeroforms (flying discs, “Saucers”, and mutants or indescripts) are best understood with respect to their origin and nature as being EMERGENTS; that is, they emerge onto our plane of perception from a space frame of reference which is different from ours. This process may also be described as a conversion of energy and a change of vibratory rates.

(2) That this is so, is obviously suggested by the phenomena themselves, since physical matter as we know it could not withstand the speed, temperature, and strain imposed by the observed operations of the discs and other forms. This does not conflict with the apparent composition of the 11 landed discs.

(3) When the energy conversion mentioned in (l), sup., takes place, the aeroform becomes visible and tangible. It appears to be and definitely is what we call solid substance, and so remains until the vibratory rate is again converted. The “steel” of the landed disc is an etheric steel and its copper is etheric copper- since the prototypes of all our metals exist in etheric matter; nevertheless, chemical analysis has shown certain radical differences. The conversion process amounts to materialization and dematerialization (“mat and demat”). “Demat” on our plane of perception would be “mat” for any consciousness functioning on the etheric level, and vice versa.

(4) Just as there is a spectrum of sound and of color (ending in sounds we cannot hear and colors we cannot see), so there is also a spectrum of tangibility, ending in forms of matter which are too dense to be touched. The ordinary matter of our plane is a rarefaction, and the interspaces between the nucleus and the electrons are relatively enormous. The extremely dense matter of the ethers passes through earth substance freely and almost without friction. But if the vibratory rate of an etheric object is slowed down,it becomes less dense and enters our field of perception.

(5) With reference to our use of the word density: this word is used in different senses by physicists and demands definition, for which we cannot here take Space.

(6) Etheric matter on account of its density is subject to the play of many subtle forces, including the energic activity of thought. Any form or object of which the mind can conceive can be brought into existence by mental action, and controlled by the same means. Etheric objects are in every way as real as those of our own world. And there is abundant experimental evidence for the control of “mind over matter” on our plane of perception.

(7) The foregoing paragraph applies also to.the bodies of Etherian people. Our own bodies are truly made by our minds; we identify ourselves with them and control them. The Etherian makes his body in a somewhat similar way, but quickly and easily, and in any size and form he chooses. By the same principle he can produce the form of a sphere, a cylinder, a disc or “Saucer”, and any desired vibrations of color and sound. 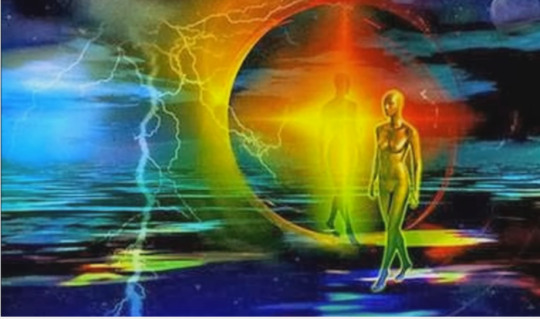 (8 ) Whether the Etherian people sure “human” or not depends entirely on one’s definition of the word human. So far as we know they are not excarnate humans and have not lived on this planet, though often visiting it. It is a cardinal mistake to assume that their bodies, and the other ships created by them are necessarily the same as we have seen them, when they withdraw to their own planes of existence. It is
a cardinal mistake to assume that they are all of the same kind and race, or of the same moral character and evolutionary development.

(9) The vehicle of an Etherian (whether his body or his ship) is thus essentially a thought-form (as our bodies are also), and a thought*-form can be posited anywhere. The problems of space travel as we conceive them, do not exist for him, as implied in Para, 1 above. By altering his vibratory rates the Disc Etherian penetrates our seas and our earth as easily as he does our atmosphere. All the aeroforms pass through
each other (on occasion) and through our dwellings at will, and are and always have been invisibly present in great numbers.

(10) The Etherians themselves (or entities purporting to be such) have given the following account: The first step in constructing the huge spacecraft is to isolate a cube of space (or ether) to a very low vibration frequency. This etheric substance is then given the desired form and the proper equipment is placed within it, according to its proposed station and operation. This work is done mainly by mental means. The Etherians make use of machines and apparatus, but these are also etheric.

(11) When the ship is completed it is posited by mental means (teleportation) in any desired location, near the earth for instance. So far, neither the ship nor any of these operations would be visible to us. But if the frequency of the etheric matter is then converted to other rates, the ship may or will become visible and tangible to our senses. But there is no crossing of space involved at any time. There is simply a change of location, by a change of vibratory rates. 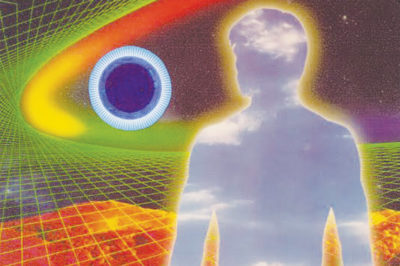 (12) This last principle cannot be reiterated too often. It is basic to any understanding of the whole mass of aeroform phenomena.

(13) These huge craft may be miles in dimension, or even of planetary size, hence the feasibility of the “evacuation of a planet” if necessary. Under what conditions these huge objects, hanging hundreds of miles overhead, are converted to perceptible frequency rates is of course unknown. But Flying Saucers and other forms discharged by mother ships are obviously so converted, in order to operate under gravitational and magnetic conditions peculiar to our planet. Or it may be a part of the over-all plan that those objects be made visible and tangible to us, as part of the education of earth people.

(14) Recurring to the concept of “emergence”, it may be helpful to quote the following illustration: Suppose we have a aeries of concentric balls, one within another like the “Chinese eggs”. Call the central ball, No. 1, and the others Nos. 2- 3- 4 etc. For any given point on, say, the 6th ball, there will be a corresponding spot on both the inside and the outside of ball No. 5 and of ball No. 7 – and so on all the other balls also. Consider that each ball has its own vibration rate. Then if you wish to move any object on (say) ball 6 and place it on ball 5 or 7, you simply change its vibration rate accordingly. The object will then be located in a new place. It will not have to pass over any intervening space- it simply comes into existence in a new location. A change of frequency equivalent to a change of location.

(15) Such a statement as “I am here” means simply that I am “tuned in” to objects, sounds and colors of my surroundings. If this receptivity were altered so that I “tuned out”, the environment would disappear, but would be replaced by a different one unless the change destroyed me. This would be a space-time operation and a change of location without transit of space. 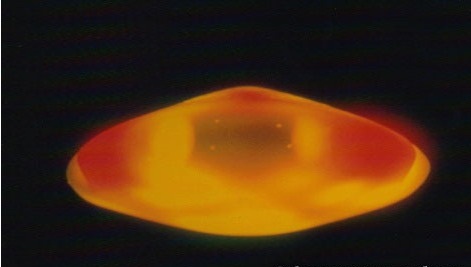 (16) Contemporary distrust of the concept of the ether is Justified and must be left to physicists who apparently do not read the literature of their own subject.

(17) So far (August, 1955) the whole mass of material on the aeroforms, with some tentative exceptions, has not produced an over-all interpretation which is at once intelligible science and sound metaphysics. Yet the interpretation which was reported by us and here summarized is steadily gaining ground, and we bespeak its thoughtful consideration on its own merits. It will be expanded and altered in details but it is basically correct.

(18) Any workable hypothesis or theory must always ”save” the major aspects of the phenomena involved. In the case of the aeroforms these are: The fact that many of them (probably all) are mutants, and can change form rapidly while under observation they may became translucent and transparent while remaining tangible— Their speed, control, power of maneuver and variety of performance far exceed any air craft as yet constructed by us— They produce lights, sounds, colors and apparently destructive effects unfamiliar to us– Their probable propulsion (with in the gravitational and magnetic field of the earth) can partly be understood in theory, but not their so called transit of interstellar space.

(19) To repeat from para 17. sup., it is only the “etheric interpretation” which covers all these phenomena in an intelligible and rational manner. This interpretation was given in 19^6 by the Probert Controls (deep trance mediumship), and has been steadfastly maintained by them ever since. But it claims our attention only on its own merits and not because of its “supernormal” source. These Controls assert at this
writing (August 1956) that the phenomena will shortly become even more fantastic and extraordinary than heretofore. 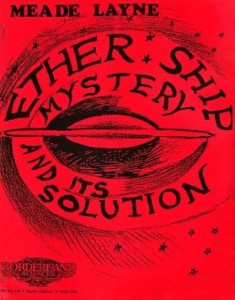 Guarded comment by some space scientists, notably Dr. Hubertus Strughold, indicate they are in agreement with some of the points made
above by Meade Layne ten years ago. Somewhere in our files of clippings is a brief one quoting Dr. Strughold as saying that it may not
be necessary to stock our space rockets with huge quantities of air, food and water for the long trips to Mars and Venus, as it wont take
any “time” to get there! Such a remark could only make sense to an orthodox physicist if he had carried Einstein’s Theory of Relativity
to its logical conclusion, which, to our way of thinking, is the 4-D or Etheric Interpretation of the Aeroforms. Maybe this is the major
reason for the apparent Russian slow-down in the Moon race, even. It takes time to adjust one’s thinking to this concept of the collapsed
time-field of outer space.

Download a Full Version of this Borderlands Volume Here: http://bit.ly/2TlvstW

A collection of the Journal of Borderlands Research donated by Thomas Joseph Brown can be downloaded here:  http://bit.ly/2L5cGWo