Ethers and Counterspace by Nick Thomas

The animation shows how a plane in counter space moves towards its infinity in equal steps for counter space. These are not equal angles, as is obvious, and we refer to this measure as turn, which is for counter space the analogue of distance. Its magnitude becomes infinite if the plane reaches the infinitude (shown as a star). The polar relationship between space and counter space means that the measure of separation of planes is polar to that of points in space, while the measure of the separation of points (shift) is polar to that of planes and hence like an angle. Thus pairs of planes can define vectors, but not pairs of points.

This means that the metric of counter space is expressed by turn and shift, whereas that of space is embodied in length and angle. In addition the polar opposite of area and volume may be defined, which are referred to as polar area and polar volume. The polar area of a cone in counter space is made up of the planes in its vertex, as illustrated below:

Planes in the vertex only have two degrees of freedom and thus make up a polar area, not a polar volume. This may take some getting used to as our Euclidean consciousness tends to regard the region described by the planes as an infinite volume. The polar area is calculated by integration, which is figuratively illustrated in the following animation:

On the left is the integration of the polar area of a cone in counter space and on the right the dual integration of the area of a circle in space. As it is difficult to represent the planes involved in this diagram we have taken successive conical segments bounded by a sphere to represent steps in the progress of the integration. However this is purely representational to help convey the idea, and should not be misunderstood in a point-wise manner. The spherical boundary is adopted to keep the diagram finite, the actual polar area extending outwards to infinity, as do the cones.

The formulae for polar area and volume are the same as those for the dual spatial figures, except that lengths and angles are replaced by turns and shifts respectively (Reference 11).

When dealing with the states of matter we worked with point linkages between space and counter space. For the ethers (as the more subtle aspects of reality are called by Steiner) we are concerned with planar linkages. The most suitable linkage tensor for light is the contravariant bivector, represented by a cone in counter space (dual to the oriented-circle-representation in space). It is suitable for polar affine linkages characteristic of light. This turned out to be an investigation of actual counter space cones acting as photons, the polar area of a photon cone being constant. Thus photons are initially neither waves nor particles. Their polar area embraces the whole of the apparatus and so the “spooky” multi-path type experiments of modern physics may be more comprehensible. Reflection, refraction, absorption and diffraction are all treated on this basis in Reference 11.

This led to the conclusion that time is the reciprocal of radial turn i.e. the turn between spatially parallel planes. Thus time increases outward from the CSI in counter space. The consequence is that light itself does not in fact have a velocity, but it appears to have one in ordinary space, and moreover that is necessarily constant without the necessity for Relativity. This follows because the product of the radial distance of the apex of a cone from a CSI, and the turn of the orthogonal plane in the apex, is constant. An interaction must occur at the apex (Reference 11), so if the turn is the reciprocal of the time then we have a constant ratio of distance to time, which seems like a velocity for our spatial consciousness. It is independent of the state of motion of the observer.

We see two CSIs emitting photon cones (yellow) interacting at their apices. Since the turn T increases inwards while the radial distance increases outwards, and T is inversely proportional to r, we have r1.T1=r2.T2, so r1/t1=r2/t2=c, a constant which is clearly the so-called velocity of light. The light represented by the polar area is not moving in this way, but an interaction forces the cone to adopt a particular configuration instantaneously, which then gives the appearance of a velocity when interpreted spatially.

The same view of time arose independently from a consideration of momentum and potential energy.

The residual two-dimensionality is timeless and concerns the ether proper, which need not be linked to space. When the light ether is linked we get photon cones as described above.

This prompted the idea that the ether is concerned with time-invariant processes in counter space, and for light the transformations involved make the polar area of photon cones time-invariant.

An obvious time-invariant field of study is action in the surface of a sphere, noting that this refers to its tangent planes. Surface spherical harmonics provide a suitable approach. They are especially significant when the action is linked to space as then Laplace’s equation must be satisfied. They are like standing longitudinal waves in the surface. A standing wave round a circle must consist of a whole number of wavelengths to be single-valued, and a similar restriction exists in the surface of a sphere, but of course in a more complicated manner. The following image shows an example of the distribution or wave pattern for such a harmonic: 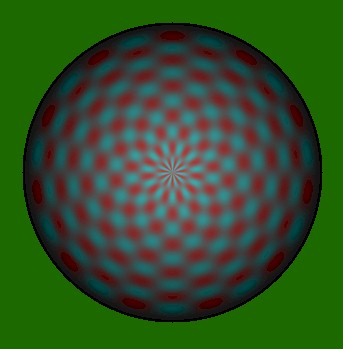 This depicts a pointwise distribution for the X(30,11) surface spherical harmonic, red for positive amplitudes and cyan for negative. For counter space the colour of each point represents the magnitude of a surface turn in a plane tangential at that point.

The use of surface spherical harmonics brings in the need for quantisation or whole numbers, and it also brings in rhythm, which suggests that the ether concerned is the chemical ether. This is because Steiner found it could be depicted as the number ether, the tone ether and the chemical ether. Thus the relation of this to chemical action is being explored (Reference 11). In particular chemical bonding is being studied with the help of prolate spheroids. The linkage is polar special affine.

It also suggests that the “waves” of the conventional wave function may be interpreted as rhythms in the chemical ether (i.e. the surface longitudinal waves depicted above), as an alternative to the Born interpretation. It is interesting that the same mathematics is required as for much of quantum physics, but for different reasons. The necessity for time-invariance arises from the whole approach of the work, whereas in conventional physics it is adopted for mathematical convenience.

Life ether is concerned with fully metric counter space linkages, which are the most rigid (compared with affine linkages) and are seemingly unsuitable for it. But membranes are fundamental structures in living organisms, being metric in character and yet not rigid. They govern “inside” and “outside” in a most important way e.g. the plasma membrane of neurones which may be interfered with by drugs. Each cell is surrounded by a plasma membrane which governs what may enter or leave.

In counter space the term “inside” apparently has the opposite meaning, for if we consider a sphere with a CSI at its centre then the inside is where no elements making up the polar volume are at infinity for counter space i.e. the planes that do not intersect the sphere. Thus for counter space the “inside” of the sphere is what we would normally call the “outside”. This reversal is seen as being significant for membranes, for then all cells of an organism are “inside” the plasma membrane in counter space (for an individual cell). In other words all cells are inside all others!

The synergy of such a system of cells forming an organism in this way will thus govern its growth and healing, and mathematically this kind of synergy can be related to fractals, and may explain why we find fractal forms in Nature. Also the polarities involved invoke path curves which – as explained elsewhere – are ubiquitous in Nature. A particular form of polarity that seems fruitful is the pivot transform.