Geometry of the Matrix by Caleb Thomas 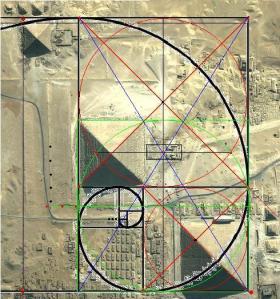 The math and geometry of the Universe, Galaxy, Planets, Stars, The Great Pyramid, And the Human Body

New Perspectives on the Great Pyramid

Following the line of synchronicity:

Using the perfect heart beat as the second of time, there would be 87,636 heart beats in one sacred day.

In the precessional cycle of 25,825.8 calendar years, there are 876.36 orbits of the planet Saturn. (The relevance of Saturn or Kronos figures strongly in the whole system. Refer to sections Saturn Source of Measure and The Well Tempered Solar System.)

In one rotation of the galaxy, there are 8763.6 precessional cycles.

the pyramids “surpass description and are equal to a number of the greatest works of the Greeks, but the Labyrinth surpasses the pyramids.”

The heavens are a labyrinth of time, timing, cycles, signs and portents. Man finds his measure in the stars, and in the planets. From the heavens he acquires the measure of the self, for the labyrinth is also the maze within us, and the ‘thread’ which guides us is connected to everything in the universe.

The human body, which evolved on a pulsating planet animated by the rhythms of the firmament, plays out the music of the spheres on its exquisitely tuned physiology. The planets are both above us and in us.

Actually it took me a long time to really understand Bruce’s stuff. Back when I began this journey 10 years ago, I had all his books but it was all math and data..it really didn’t make much sense to me either.

As I went along and was writing the script, I began to see the pattern through the chaos. Like most things, it’s when you start to subtract or take away that you get down to the most basic.

When I edited the doco, if anyone is familiar with the process, you are literally going over the material hundreds of times, cutting, re-arranging, listening for blips and pops etc to cut out.

There were 270 in this case, which meant that’s roughly how many times I was listening to the info over 5 weeks.

What we have to realize is that matter and antimatter come together in a harmonically tuned resonance with each other, vibrating at 144,000 cycles per second, which creates the illusion of our reality.

It only appears solid, or real because we are tuned to it. As a photographer, I’m familiar with frame rates, and most of you have probably seen footage in slow motion or super fast captures that show singular droplets of water in a waterfall etc.

I often wonder what we would see if we could capture at 144,000 frames per second.

Of course to do that, you would need an enormous spinning disk with a computer controlled aperture, and super magnifying lens to boost the light input, otherwise there’d be no exposure.

His grid harmonics are the extension of the understanding that the earth itself is harmonically tuned to the universe, and it’s dimension, distance to the sun, rotation etc, all have specific values.

Resonance is when everything is in tune, harmonically balanced, like the old balances on cars, or on your wheel.

The waveforms that are created are in unison, and at a harmonic pitch.

So imagine now, that a bomb is dropped on one point of the earth. Picture it like dropping a stone into a still pond.

The emanating waves spread out, and depending on the latitude and longitude points, you can mathematically plot a harmonic co-ordinant such as a volcano’s explosion, in relation to the square of the bomb site.

Bruce explains this in more detail in the DVD.

As you know my personal research is the Great Pyramid. I believe that it too is placed and tuned (or was) to resonate in tune with the planets movement and vibration. A coupled oscillator.

I grew up with analog synthesizers, and those of you who have ever played around with a moog, korg, or EMS Synthi, as I was lucky to have, will know what the dual oscillators do.

Basically you can incrementally tune them to resonate in harmony (or not) with each other. Two wave forms.

We are analog beings. Now I must stress this to everyone out there reading this.

Digital is the realm of the machine world, The Matrix.

We cannot assimilate or be in harmony with it, and to continue to use it, only creates dis-harmony with us. Digital mobile phones, digital tv, digital audio (mp3’s).

A sine wave is perfect example of an analog signal. It is smooth and flowing like a river, or the electrical energy that coral castle code presents. A wave-form.

Digital is square wave. It is sharp, stepped increments, that cut off 50 percent of the overtones, and harmonics of the frequency or sound.

That’s why when you get in your old car and slap in an audio cassette, it’s like heaven to your senses. You get the full spectrum and harmonic overtones which vibrates in tune with you.

MP3’s are harsh. And our frequencies are all off a bit, out of harmony, tuned to A=440, this is all wrong, our ancestors/the planets/nature (even the birds, wales and dolphins song) is all tuned to A=432.

if you look around, you’ll see everyone on their iPad or cell phone or computer, not interacting with real people around them, in their own world, on the Internet, a fake reality that is taking away our consciousness.

Its no wonder people are dizzy and light headed in a “brain cloud” our brains use frequencies for synopsis. ELF frequencies are everywhere, no wonder you are sleepy!

My belief is that we are being purposely de-tuned.

We are being DE-sensitised to the greater universe, slowly being cut off from being able to “sense”, “listen” and “communicate” with our higher selves, with nature and the ebb and flow of life.

Our bodies are breaking down from disruption by assault from mobile phone towers pumping out neuron-calcifying signals, and we press these devices against our head.

I threw away my analog phone in 2000 when they switched over to digital. The rep told me that I would get headaches for a few weeks, but it would go away…He also said that 300 metres radius around a mobile tower is what they refer to as the “cook zone”

Now take a look at where they position these things. In school grounds, shopping centres, housing developments, and they are getting lower and lower to the ground.

It’s no wonder “The Secret” isn’t working well for people. We’ve been cut off from reaching our higher self and the Universe.

Now, I’ve been doing The Secret for 20 years, and was very pleased to see that message get out. But now, I find enormous difficulty doing it at all.

My brain feels fried. I feel blocked, like a neural cork has been stuck in the bottle.

I think that’s the idea. These kids who play these killing games all day on playstation tm or other platforms, are losing frontal lobe activity, and that’s precisely where we communicate with the “other” realms.

Vibration is everything, everything is in motion. As soon as it stops, it stagnates and dies. Even solids.

You can see this in the Hutchinson Effect, where metals literally fly apart. The frequency has been reached where it exponentially resonates and breaks like a glass does at the right harmonic.

I’d like to mention that it’s harmonics that does that to the glass. Resonating at the same frequency and magnifying it.

So, with Bruce’s work, he’s proved that an Atomic device does the same. It takes apart matter and atoms in an explosive manner, and to do this, it must be harmonically tuned to a position on the earth, and also to the position of the sun in the sky at a specific time. Universal co-ordinants.

If you want to go anywhere in space, you need, as in Stargate, all the co-ordinants to pinpoint the location.

In a 2D road map you only work with 2 co-ordinants down and across, and you can find any point. In 3D space, you need 3 points. That’s basically it.

Einstein’s own equation of relativity gets very close to this Unified Field in and of itself. Almost everyone knows that the equation reads Energy equals Mass times The Speed of Light (C) squared, or E=MC2. What Einstein hoped to do was to solve this equation for the Speed of Light alone. He believed that the value for mass could eventually be substituted as a measurement of light. If this was done, then all of Creation could be expressed as being made up of Pure Light – mass and energy entirely a function of Light. This is the true “unified field” that Einstein was searching for.

As amazing as it must sound, Cathie solved this problem. In the Grid, he discovered an expression of Mass that was phrased in terms of the Speed of Light. At the end of this chapter, we will print his solution, but we will not try to discuss it because of its complexity. (More adventuresome authors might try to rephrase these complex arguments into their own words, so that they are not just flat-out plagiarizing Cathie’s own work.) So, even though Cathie “cracked the code” of the Unified Field Theory, what is actually more interesting and important to us is the discoveries that he made along the way! As Cathie approached the solution to the puzzle, he unearthed some fundamental discoveries that forever change our understanding of “sympathetic vibrational physics.”

The stunning, arresting and incontrovertible truth of Cathie’s findings, (mirrored by synchronicity just now on the author’s clock,) is that the “Grid Speed of Light” is – you guessed it – EXACTLY 144,000 minutes of arc per grid second in free space.