Max Planck (1858-1947) was born in Kiel Germany and attended schools in Munich and Berlin. Planck was an early pioneer in the field of quantum physics. He had been commissioned by electric companies to create maximum light for a minimum amount of power. For his research he used the concept of black body radiation. 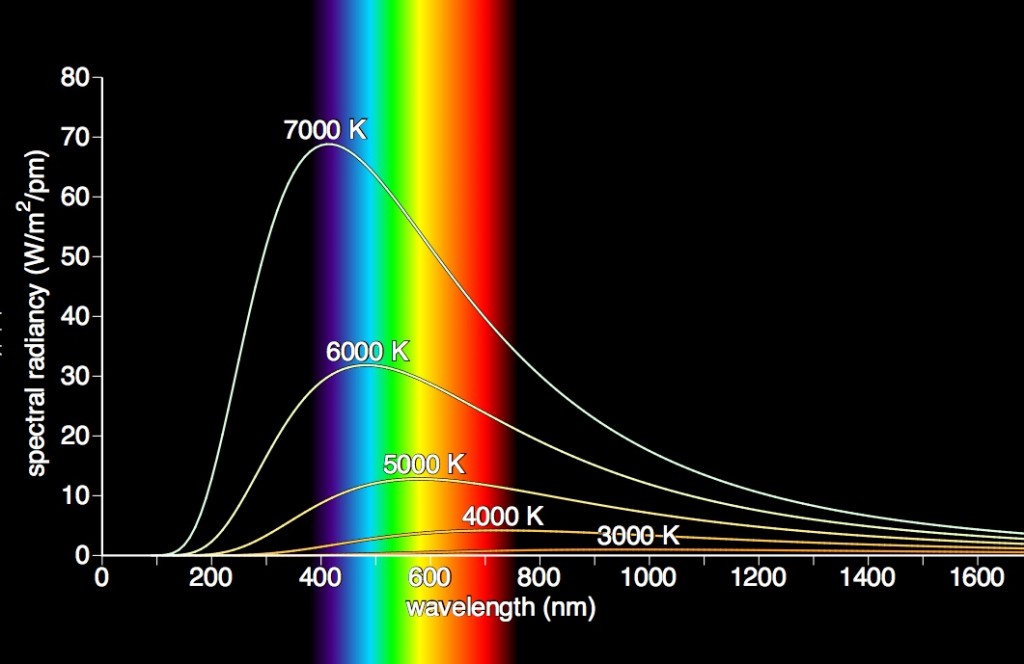 Any hot object emits electromagnetic radiation, and the maximum in the emitted wavelength shifts to shorter wavelengths as the temperature of the emitter is raised. A black body is the name given to a theoretical ideal emitter, an object capable of absorbing and emitting all wavelengths of radiation equally. A black body emitter may be successfully approximated by a small opening into a heated cavity. The emission curves of a black body have the following form: where T_1 > T_2 > T_3 . The energy distribution, or spectral energy density, is the energy per unit volume of the cavity that is emitted in the wavelength interval

[latex]\lambda[/latex] to
[latex]\lambda + d[/latex]. Note the total area under the curve increases as the temperature increases, indicating that the hotter an object is, the more energy it radiates per unit volume. Analysis of the data from black body emitters led to the formulation of the Wien displacement law:
[latex] T\lambda_{max}= 0.00298 km [/latex]

relating the temperature and the wavelength of maximum energy density: The problem of the energy distribution may be treated classically by considering the electromagnetic field as a collection of oscillators of all possible frequencies. The presence of radiation of frequency

[latex]\lambda[/latex] then signifies that the oscillator of that frequency has been excited. The classical equipartition principle may then be applied to determine the average energy of each independent oscillator. From this basis follows an expression known as the Rayleigh-Jeans law after the physicists who originally formulated it: where
[latex]\rho[/latex] is the spectral energy density.
[latex]\rho = \frac{8{\pi}kT}{\lambda^4}[/latex]

[latex]\lambda[/latex] means that as the wavelength gets shorter and shorter, the spectral energy density tends to infinity. This result is patently absurd, as it suggests that even at room temperature, objects should radiate strongly in the high frequency portion of the spectrum (gamma rays, x-rays and the ultraviolet), which is clearly not the case. This failing of the law is termed the ultraviolet catastrophe:

Around 1900 Planck developed the concept of a fundamental unit of  energy, a quantum , to explain the spectral distribution of blackbody radiation. Planck himself remained skeptical of practical applications for quantum theory for many years. In order to explain blackbody radiation, Planck proposed that atoms absorb and emit radiation in discrete quantities given by E = nhf

n is an integer known as a quantum number

f is the frequency of vibration of the molecule, and

h is a constant, Planck’s constant.

Planck named these discrete units of energy quanta. The smallest discrete amount of energy radiated or absorbed by a system results from a change in state whereby the quantum number, n, of the system changes by one. 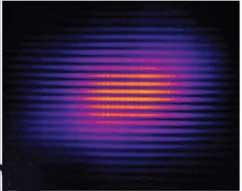 The experimental observations may be accounted for by limiting the energy of each electromagnetic oscillator to discrete values. (This is quite contrary to the classical view, in which all possible energy values are allowed.) The name given to this limitation of possible values is quantisation of energy. This idea was originally proposed by the physicist Planck, and he discovered that the observed data were reproduced if he supposed that the energies of an oscillator of frequency v were limited to integer multiples of hv, where h was a fundamental constant which is now known as the Planck constant. This assumption allowed him to derive the Planck distribution:

[latex]\rho[/latex] the spectral energy density. This expression provides a good agreement with experimental data, and the constant h, which is an undetermined parameter in the original theory, may be adjusted to obtain the best fit. This allows measurement of the value of h by experiment. This expression is similar in form to the Rayleigh-Jeans law, the main difference being in the exponential term in the denominator. At short wavelengths the exponential term is large, and as the wavelength tends to zero, the exponential term tends to infinity faster than the
[latex]\lambda^5[/latex] term tends to zero. The upshot of this is that as the wavelength tends to zero, so does the spectral energy density. Thus the ultraviolet catastrophe is avoided. 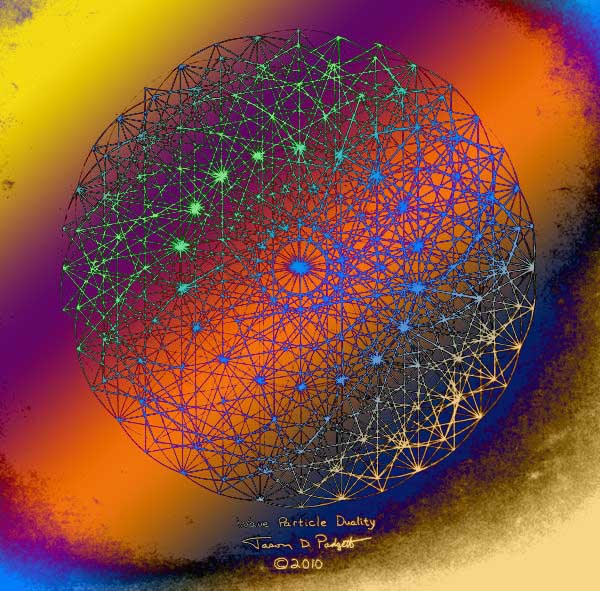 Where does Gestalt Aether Theory fit into the Planck distribution?  Obviously the quantisation of energy is unexplainable in classical terms in the sense that there was no physical phenomenon that would account for such an unusual distribution of energy, certainly the explanation of energy on the basis of ‘waves’ was a huge failure as has been demonstrated above. However if we disregard wave particle duality as it is at present understood and the ‘complementarity ‘ principle which states that a sub-atomic particle is either exclusively a particle or exclusively a wave but can never possess both properties simultaneously, Planck’s constant begins to make sense, especially from the view point of Gestalt Aether Theory.

What does quantisation of energy mean ? Basically it means that while observing black body radiation, the number of atoms taking part in the black body radiation is taken into account together with the wave-lengths and temperatures at different samplings of frequency and wavelengths. The problem was that no number of samplings were able to correspond with observable experimental data. Planck then calculated the difference in resulted obtained by experiment and those obtained by mathematical calculation. Planck was then able to determine a new constant that came to be known as Planck’s constant that was determined by using the known values of the speed of light, c , and the charge of an electron, e and thereby computing h.

The emphasis here is on the fact that Planck’s constant equates to individual packets of energy and that is precisely what is available in Gestalt Aether theory model of the photon. According to Gestalt Aether Theory the electron is a charged particle, it is therefore natural that what it emits are not waves or particles or even combinations of the two but bursts of electric energy.

As each burst of energy is released from the electron it is separated by a di-electric medium (vacuum the spaces between each burst of energy are too small to allow for entry of atoms or molecules) the bursts of energy get polarized. Two points should be understood here. (a) The energy of the emitted ‘photon’ is determined by the amount of energy it contains and (b) its frequency is dependent on the frequency with which each complete photon is emitted by the electron. The wave-length of the photon is determined by the next stage of photon creation by the electron. As the bursts of energy emitted by the photon become polarized they form a solenoidal field of electrical energy around themselves, making each photon a self-contained packet of energy that will retain its energy due to its capacitor like construction. Capacitors are used to store energy. 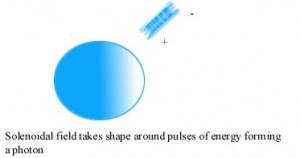 All of these attributes can be explained very capably by Gestalt Aether Theory, there is no need for the esoteric and eerie wave/particle duality or ‘complementarity‘ theory. Take for instance the question of wave length and frequency of a photon. Both of these attributes are explained in a satisfactory manner by Gestalt Aether Theory. Thus Gestalt Aether Theory brings together all the physical properties of the photon together with experimentally obtained observations on how ‘light’ or ‘photons’ behave under different circumstances. Examine first the larger diagram of the photon shown below, this is what a photon might look like: 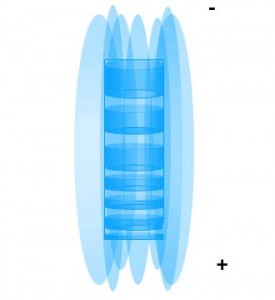 Note especially the solenoidal field around the bands of energy separated by a di-electric. It should be explained here that IF an electron is able to emit electrical energy, then it is also possible for that energy to settle into the configuration shown above. This configurations enables individual photons to link up, both serially (i.e., end to end) and in parallel (i.e. side by side). The frequency of a photon depends on the periodicity with which it is emitted by the electron. One has only to stand beside an open window and look out at a lawn and what one is seeing is electrons in atoms emitting photons at approximately

[latex] 5 .10^{14}[/latex] photons a second. That is a quite incredible amount of emissions, and they take place continuously for aslong as the atoms are being excited or irradiated. Without irradiation there would be no colours , the atoms would be quiescent and non-emitting. So the frequency of a photon depends on the rate at which it is being emitted by the electron. The wave-length of the photon can then be obtained by dividing the speed of light by the frequency!

These concepts are not abstract they are not figments of the mind hidden away in multiple dimensions, these are phenomenon that are real, that can be explained in terms of what is being experienced! For instance in the final analysis, because of their physical construction, streams of photons can come together to give the ‘appearance’ of light of another colour. Take for instance a stream of photons of red colour having a wavelength of 700nm and mix it with a photon stream of blue colour having a wavelength of 500 nm, then wavelengths of 1200 nm and 200 nm would be produced. However, because of the manner in which our eye-sight perceives these frequencies. It is possible to see the mixture of these two wave-lengths of the colout purple or violet. Importantly the wave-lengths can separate as easily as they combine and still retain their individual energies, frequencies and wave-lengths.