Ever since electricity in its modern form was discovered more than a century ago, it has been taken for granted that the electron was the fundamental charge carrier. The physicist J.J. Thomson was the first to speculate on the nature of the electron. His experiments with cathode rays prompted him to make a bold proposal: “these mysterious rays are streams of particles much smaller than atoms, they are in fact minuscule pieces of atoms.” He called these particles “corpuscles,” and suggested that they might make up all of the matter in atoms. It was startling to imagine a particle residing inside the atom–most people thought that the atom was indivisible, the most fundamental unit of matter. J.J. Thomson later came up with the ‘plum pudding’ model of the atom wherein numerous electrons were embedded into the positive matter of the atom.   The term ‘electron’ coined by Irish physicist George F. Fitzgerald replaced the term corpuscles and the modern day electron was born.

Max Planck’s formulation of the Planck constant and Einstein’s experiments with the Photoelectric effect demonstrated that electrons emitted and absorbed energy not in continuous waves as had been previously surmised but in small indivisible packets of energy which were termed ‘quanta’. The name eventually given to this new aspect of light was the photon, although it officially received this name only in 1926 when Gilbert N Lewis formally proposed the name ‘photon’ for the particle responsible for the mediation of energy between electrons.

There can be little doubt that light does possess both wave like and particle like properties. This has been demonstrated over and over again during the past four centuries from the time of Newton and Hugyens, right up to Einstein’s photoelectric effect and the Compton effect. Thus the wave-particle duality of light is well established. The question that puzzled scientists of the time and still continues to pose an enigma to scientists of today is how can a particle possess both frequency and wavelength while maintaining always a distinctive energy as demonstrated in the photoelectric effect? The energy of a wave is dispersed throughout its length.  How and why Quantum Mechanics sought to extend wave-particle duality to ALL sub-atomic particles including protons, electrons, neutrons and even atoms and molecules themselves is another story. Of interest is the theory of ‘complementarity’ formulated by Neils Bohr that states that light can possess the properties of a wave and of a particle but never possess both properties simultaneously. This statement, even though it is one of the corner stones of Quantum Mechanics, is ‘unacceptable’ because it is not founded in reality or supported by experiment. 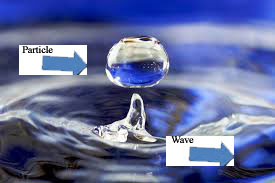 The photon as envisioned by ‘Gestalt Aether Theory’ would possess the properties of both wave and particle simultaneously. Thus the ‘Gestalt Aether Theory’ model of the photon may be thought to be based upon the ultrasound waves used in lithotripsy to shatter kidney stones. These ultra sound waves, apart from possessing particle like properties in their capacity, to deliver enough energy to shatter calcified kidney stones also possess, like the photon, wave-length and frequency! Thus ultrasound used in lithotripsy might have a wavelength of 0.01 m and a frequency of 30 KHz! This is information that can be used as a model for the photon, namely a wave with particle like properties! It would certainly serve to explain many aspects of light and electromagnetic radiation that have been obscured almost to the point of obfuscation by the various esoteric and arcane solutions put forward to explain their wavelike and particle properties. It should be pointed out that such an interpretation of wave/particle duality precludes ‘complementarity’ theory.

Elaborating on this hypotheses that a photon can be part particle and part wave. The electron is a charged particle, therefore when it is undergoing a change in its energy what could be more natural than that it emits or absorbs bursts of electrical energy to bring about the needed change in energy. This might take the form shown in the diagram below:

The electron emits bursts of energy, it cannot emit a single fixed burst of energy because that would not account for observed phenomenon that photons have trillions upon trillions of (if electromagnetic radiation is included ) different energies. Since the time lapse between these emissions of individual bursts of energy is extremely small, the physical gaps between the different emitted bands of energy is equally small and would exclude the inclusion of any atoms or molecules, hence the gaps between the emitted bands of energy contain a vacuum which is an excellent di-electric. The existence of bands of energy separated by a dielectric gives the energy emitted by the electron the structure of a capacitor, this in turn results in the electrical energy of the bands of emitted energy forming a solenoidal field around itself. 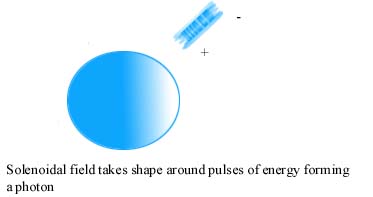 An examination of this model of the photon given below shows clearly both the solenoidal field surrounding the photon structure as well as the bands of energy separated by a dielectric. 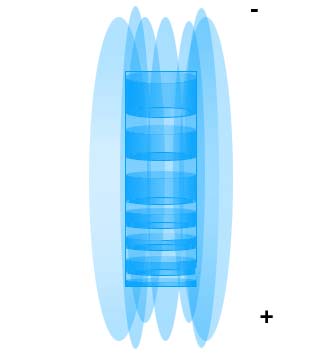 The existence of the solenoidal field around the photon, gives it wave like characteristics, it can link up with other photons either end to end or side by side (i.e., serially or in parallel). The frequency of the photon would depend on the time interval at which it is emitted by the electron. For instance blue light is emitted at a rate of

The big question is, if the photon is both wave and particle, how does it propagate? 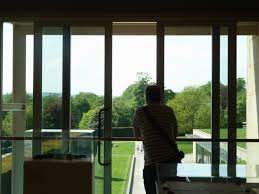 Imagine that you are standing just inside an open window it is a beautiful day, outside in the garden the sun is shining and the colours are particularly vivid today. But as you stand there admiring the view what exactly are you seeing? Maybe, the green of the lawn catches your eye, but what is happening, and why does it happen? The answer is that as sun light falls on the grass, atoms within the grass accept and absorb certain frequencies and wavelengths while rejecting others, and re-emit those same frequencies and wavelengths. If one thinks about it, this process is definitely not due to the process of reflection, the photoelectric effect has proved that photons deliver energy in discrete amounts while waves deliver a continuous energy. Yet the absorption and emission of energy by the electrons of the atom is as natural a process as reflection, electrons are in a constant state of flux gaining and losing energy. If one proceeds further into this scenario one finds that in the case of the colour green the concerned electrons are absorbing and emitting photons at the rate of

[latex] 5 . 10 ^{16} [/latex] photons per second. Thus what the eye is actually seeing is millions upon millions of electrons all oscillating at a rate of
[latex] 5 . 10 ^{16} [/latex] and emitting the same number of  photons per second. These lines or rays of photons are radiating in all directions, but the intensity of light that reaches one’s eyes is dependent on the number of these lines of connected photons that reach the retina. Thus if a greater number of lines of photons manages to reach the retina the more intense will the colour appear to be. However, things are not as simple as they sound. 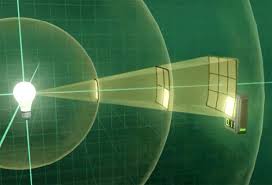 Non-coherent light such as this radiates isotropically, which means that it spreads out in all directions and follows the inverse square law. Furthermore, every available bit of exposed area in that window will be subject to the same amount of radiated light. How does that happen? In an earlier article entitled ‘Gestalt  Aether Theory : the Aether’, a brief introduction to the Aether as viewed by Gestalt Aether Theory was made. In that article it was explained that the Universe is immersed in a vast sea of ‘virtual photons’ that have a very low energy but are otherwise identical in structure to real photons. The ‘virtual photons’ of the Aether are oriented at random until a real photon is emitted when the ‘virtual photons of the Aether, line up in the direction of propagation of the real photon forming themselves into a line whose ends rest on infinity. The energy of the real photon then travels along this line of virtual photons. However, and this is extremely important, as the energy of the line of real photons travels along the line of aligned ‘virtual photons’ it is dispersed not only forward but also laterally so that the energy from the line of real photons spread out in a cone shape from its point of origin. All of the area covered by this shape is filled with the energy of the original line of photons being emitted at the source. This is why light follows the inverse square law. As the light moves further from its origin the intensity of the light varies as the inverse of the square of the distance from the source. Energy from the original line of photons is being dissipated, even as it moves forward at the speed of light, through all the photons immediately surrounding it laterally, these in turn are passing on that energy to neighbouring photons.

The above hypotheses raises two points, first that the longer that a source of light is radiating, the further that it will travel and secondly at a certain threshold of energy when individual photon energy cannot be sustained, the light just fades away and is dispersed across the virtual photon field !

This is directly opposed to the Quantum Mechanics view of light which views a photon like a bullet shot off into space that with no air resistance and very few atoms in its path, will travel forever until after untold distances and time it finally meets with a solid object and is absorbed.

It is tempting to view the propagation of light in the same way, unfortunately it does not meet with observed criteria. Light (ordinary light, not coherent light) radiating through space, spreads out in accordance with the inverse square law. The great question is why ? This is a question that Quantum Mechanics has never asked of itself. When there are no barriers in the path of propagation and very few atoms why then does light spread out in this way, following the inverse square law? The most obvious and plausible answer is that it is propagating through some medium into which its energy is absorbed and dispersed, and that medium is in all probability the Aether !

If there was no Aether there would simply be no possible reason for light to spread out in accordance with the inverse square law, as it does spread out. If there were no ‘virtual photons’ that composed the Aether, there would be no possible way in which each photon of the rapidly spreading photon front would be able to have the exact or identical energy as the originally emitted photon. This is the difference between the ‘Gestalt Aether Theory of photon propagation’ and the Quantum Mechanics view of photon propagation.

Photons do not travel forever from the time of emission to the time of absorption. Instead as they travel through the ‘virtual photon aether’ at the speed of light they share their energy among all the ‘virtual photons’ directly in contact with and adjacent to them resulting in a distribution that obeys the inverse square law. This is why, a source of light is present at every point from where it is visible and not only in a focused line or as a single diffracted splash of light.

To sum up, electromagnetic radiation relating to the visible spectrum and higher energies are emitted directly from the electron and form lines or rays of photons which in the case of non-coherent light spread out in accordance with the inverse square law. If the threshold energy is reached where individual photon energies cannot be sustained, the available energy disperses through the ‘virtual photon’ field and the ‘light’ vanishes.