In fact, Steven Gibbs says that the old sonic resonator required a barium oxide bar magnet to be use in conjunction with the electromagnet. The new radionics machine was much improved, for one thing is now contains a caduceus coil.

Not content with the performance of the HDR Steven Gibbs continued to change it. He worked on finding ways to boost the power of the electromagnet and increase the diameter of the active magnetic field.

The original Hyper Dimensional Resonator or HDR used a 10K resistor instead of a 15K resistor, and instead of the Radio Shack 1K blue capacitor we now have, it was a green .47 capacitor. There were only two rectifier diodes instead of six like now. The HDR electromagnet was not T-shaped like now. It was just a long cylindrical tube without the handles.

Also the old electromagnet of the HDR used Radio Shack speaker wire back then, whereas now it uses 21 gauge copper magnet wire.

Well, according to the inventor Steven Gibbs these improvements make the new Hyper Dimensional Resonator much more powerful.

A copper wire with a bifilar winding that has the opposing magnetic fields cancel each other.

Take a enamel copper wire and nick the middle then twist the wire into a double helix.

Now curl the wire into a spiral. This will generate scalar waves when there is a current. 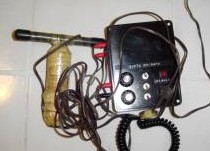 Why does the Caduceus Coil Work?

It is believed that scalar waves have strange effects including the distortion of temporal field.

The HDR caduceus coil built by Steven Gibbs should have the ability to generate an electromagnetic field that disrupts time waves and alters the flow of chronoton particles. My experiment with a watch subjected to the “gibbs effect” establishes that something is causing a disruption in the normal flow of time.

I believe this is caused by scalar waves emanating from the Hyper Dimensional Resonator or HDR created by inventor Steven Gibbs. These waves interact with those of the electromagnet to create a temporal disruption that can affect clocks. See videos of HDR at HDRusers.com 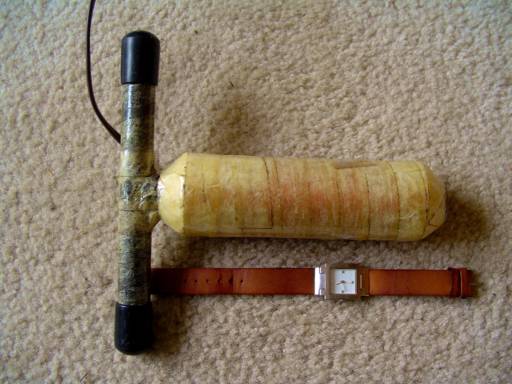 The HDR caduceus coil is that round doughnut shaped object at the bottom o the left hand corner in the picture below. This is I believe what makes the HDR work and provides the missing factor for Steven Gibbs HDR.

Insides of a Hyper Dimensional Resonator (HDR) from Steven Gibbs 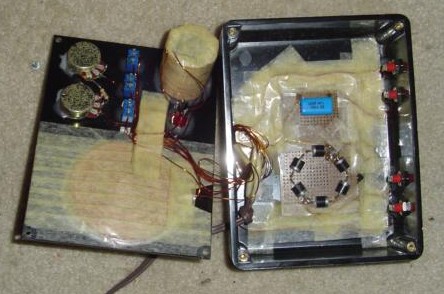 The Hyper Dimensional Resonator (HDR), must be tuned to the correct frequency to achieve its effect. Like all radionics machines, the HDR is a bit of a mystery. How do we find the proper rates to assist with astral time travel?

I believe that is a very important thing is for the operator of the HDR to enter the alpha state and clear the mind. This can be achieved through meditation, but I believe that radionics can enable people to boost their natural abilities.

We could call the Steven Gibbs HDR a techno-shamanic tool, used by technomages in attempting to increase their natural latent psychic abilities. Perhaps the pulsed magnetic field can stimulate deep thought process associated with natural psychic ability. We still do not understand the great unknown.

What we do know is that the Hyper Dimensional Resonator was invented in 1985 by Steven Gibbs while he was a farmer in Nebraska. This tool was based on an earlier more crude radionics machine known as the Sonic Resonator which Steven Gibbs developed in 1981.

The HDR has added to it a caduceus coil which Steven Gibbs says is responsible for creating scalar waves. Tuning these scalar waves to the correct frequency appears to be important. Scalar waves are said to be used in time travel experiments.

This experimental radionics machine can be used for astral time travel. The operator of the HDR needs to set the dials to adjust the frequency that is being generated.

The STM or Space Time Modulator is a small device about the size of a pack of cigs and it easily fits in a pocket. Steven Gibbs claims that this device is a mini time machine that can be used for time travel and that it can generate a time warp.

Steven Gibbs sent me an STM free for me to test and I am currently testing it.

The Space Time Modulator does not use an electromagnet, but a copper plate that is attached to the stomach chakra. It is a mini radionics machine that is portable.

How to use HDR

There are several methods to use HDR, but most of mine will focus on using Steven Gibbs Hyper Dimensional Resonator – HDR for astral time travel to the future. This is accomplished by entering a meditative state of mind and exteriorizing my soul.

These energies are what boost the frequency of my astral body and allow me to jump to the future. If my jump is only a month I am OK, but if I need to do a long jump, like a hundred years into the future, then I use a Tesla Coil alongside the HDR. The Tesla coil provides the zero vector that I use to tunnel into the future. You need more energy to travel further.

For a very long jump, like thousands of years into the future, I use several HDR units and Tesla coils. I tune all of them to the future date I wish to travel to. This allow me to use more energy in pumping up the astral body.

First ask a questions like “What are the rates that will take my to the year 2050?” After you turn on the HDR you can begin by placing one hand over the rubbing plate and stroking it, while with your other hand slowly turn the top dial clockwise and counter clockwise until you get a stick reaction. That means your fingers get stuck to the plate and feel gummy like glue. When this happens start adjusting the bottom dial. At the point of maximum sticky you have found the rates.

Inside the HDR under the rubbing plate is a caduceus coil that generates scalar waves. These scalar waves are believed to cause strange paranormal events. I believe they are responsible for many of the odd occurrences with the HDR.

To get an accurate fix on my target, I will often place an item in the witness well, like for example, a picture taken in the 1920’s of Coney Island. So I can go back to the time of jazz and Model T-Fords. However, if I wish to go to the future, I can draw a picture on a piece of paper and place that inside the witness well of the HDR. For example, a drawing of the Shire Tower in New Chicago in 2150, a city built after the war.

I will state the question “take me to the Shire Tower in New Chicago 2150” then stroke the rubbing plate of the of HDR. All the while turning the knobs to find the proper frequency. When my fingers get stuck to the plate like glue, then I can power up the electromagnet. I will let the magnet ride for about seven mins. If it goes much over ten minutes the electromagnet will get hot.

The Barium Oxide Bar Magnet is used to boost the power of the HDR electromagnet so that my astral body has more energy. This is a great way to increase the ability of the astral traveler. With a bar magnet my ability is far greater than with just an electromagnet.

By placing curly cords called “Time Coils” around my head the frequency is established. The time coil is supposed to help make my finding the proper frequency easier. They are supposed to interact with my astral soul.

I believe that a double terminated quartz crystal helps me focus on the time I wish to travel to. For example, if I want to see how things are going to be next year, I can focus on what I wish to see. The problem is that there is a big war in the future and many important landmarks are gone.

According to Steven Gibbs, the Hyper Dimensional Resonator works best when it is over a grid point vortex. Although you can create an artificial grid point using two copper pipes, a natural grid point is supposed to be better.

To find a grid point I use a EMF detector also known as a gaussmeter. This device is often used by ghost hunters because paranormal events tend to occur near a vortex. My EMF meter measures the strength of magnetic fields and basically, I am looking for an anomaly – an area where the electromagnetic fields are stronger than normal.

A grid point forms where two grid lines cross. See more on this in the Hartmann Grid. if a grid point is very powerful it is called a vortex. It is like a magnetic tornado. This is a place where the fabric of space time is weak and time travel is supposed to be easier.

A cheap way to hunt for a vortex is to use a compass. If the needle spins line a top, then you are over a vortex. This is an ideal place to use the HDR. My best results are on the morning of a full moon.

Her first book about Steven Gibbs HDR was — Stranger Than Fiction: The True Time Travel Adventures of Steven L. Gibbs — The Rainman of Time Travel

Patricia Ress explains in her latest book how Steven L. Gibbs invented the Hyper Dimensional Resonator – HDR a time machine, using knowledge given to him by two time travellers.