How Tesla Healed with Electricity by George Trinkaus 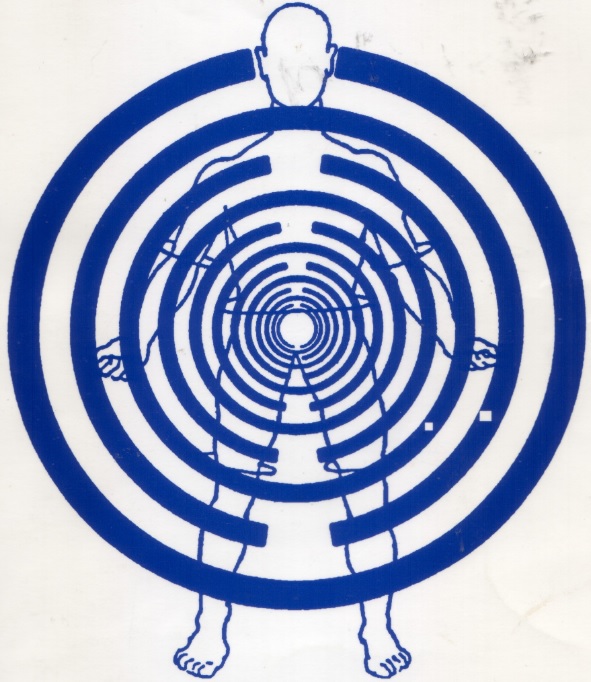 Tesla had a hunch that, since his high-potential, high-frequency currents could be passed into the body harmlessly, “these currents might lend themselves to electrotherapeutic uses.” Tesla experimented upon himself. When he was struck down in the streets by a New York taxi, he didn’t deliver himself over to the medicals but dragged himself up to his hotel room where, in seclusion and with the help of his own electrotherapy, he recovered from his fractures and contusions. Tesla never patented in electrotherapy, but in 1891 he began publishing his observations in technical journals, and seven years later we find Tesla giving a speech to the to the American Electro-Therapeutic Association in which he details with drawings the high-frequency apparatus he invented for this purpose, which included a Tesla coil.

Tesla’s suggestions were taken up in earnest by George Lakhovsky, who perceived that the twisted-filament, coil-like structures within all living cells constitute ultramicroscopic circuits “capable of oscillating electrically over a wide scale of very short wavelengths.”

Lakhovsky’s apparatus evolved from Tesla’s. “These circuits,” Lakhovsky wrote, “are stimulated by damped high-frequency currents from a spark gap. Thus each circuit of the transmitter vibrates not only on its natural frequency, but also on numerous harmonics.” Here we must sing praises to the old spark gap because Lakhovsky observes that the frequency of his spark-gap oscillator’s basic vibrations ranged from 750 kilocycles all the way up to 3 gigacycles! And he adds that “each circuit also emits many harmonics, which, with their basic waves, their interferences and their effluvia can reach the scale of infra-red and even that of visible light.”

Lakhovsky employed spark-gap oscillators, Tesla coils, and even vacuum-tube oscillators, and he put some of these devices into patent. The Lakhovsky multiple-wave oscillator (MWO) terminates in a distinctive frequency-independent antenna consisting of a number of concentric open rings of different diameters. The MWO antenna provides full-body stimulation to the patient, who is situated a few feet distant from an antenna or between a matching pair.

Tesla’s electrotherapy idea was taken up as well by Arsene D’Arsonval and Paul Ouden. One finds in the Tesla coil literature many mentions of an “Ouden coil,” when a Tesla coil is obviously meant. This has perplexed some researchers who conclude Ouden’s coil had to be special, but he had just made it a safer apparatus. (The Ouden circuit grounded the bottom of both primary and secondary, but this feature can be found in Tesla’s circuits as well.) Perhaps, as Tesla’s name became taboo in the media, writers and editors chose to call the device by Dr. Ouden’s name to play it safe.

Lakhovsky called his book The Secret of Life, no less. The ability to electrostimulate living tissue at the subcellular level and thus energize the life force within has huge medical implications.

Organized medicine (which works hand-in-hand with pharmaceutical corporations, which in turn work hand-in-hand with the mass media) distracts the public from the observation that the myriad diseases that afflict us could stem from a fundamental condition, the weakening of the “life-force” or of the “heart of health” (to use some old terms rather then the “immune-system” of contemporary AIDSpeak).

In modern medicine each and every disease, disorder, and (more recently) “syndrome” is assigned its own particular pathological designation, its own symptomology, its own etiology (cause), and, if possible, its own particular medical specialty. Thus particularized, each disease can have its own therapy, be it a vaccine, an antibiotic, an anodyne, a surgery, or whatever, and may even have its own medical specialist. One of the most hugely profitable industries on the planet has developed out of this distraction and brainwash that passes for modern healing.

The scam has gone so far now that researchers invent diseases and syndromes by definitional contrivance, even when no distinct and separate symptomology or etiology exists.

Lakhovsky proposed that exposure to a blend of higher frequencies stimulate the cell’s life force, restoring vigor and balance. The vibrational responsiveness of living cells suggests a whole new medical panorama in which electric waves, both natural and man-made, exercise influences both healthful and malignant upon the body’s cellular oscillatory balance.

According to Lakhovsky, treatment with the multiple-wave oscillator mobilizes the body’s own self-healing reserves. Thus the range of diseases that can be treated is infinite.Degenerative conditions develop when the body’s self-healing reserves lose their power. Infections, cancers, inflammations, skeletal degeneration and organ dysfunctions then develop, but often such conditions can be reversed if these reserves are revived. Even fractures and cuts can be healed in a fraction of the normal time. Neural dysfunctions, from headaches to deafness to paralysis, can be normalized. The MWO has been used successfully to treat arthritis. Can any such a cure-all really exist? If there is a generalized life-force enhancer, then the answer is yes, and this may be it.

An allied mode of MWO-style electrotherapy in which one that does not rely upon the sophisticated concentric-ring antenna is the violet ray. The violet ray wand is another convenient means of translating electric energy into the body, but in a more focused, localized mode.

A low-pressure inert noble gas, such as argon, contained in a glass bulb or tube is electrified by high-potential, high-frequency Tesla currents generated by a spark-type Tesla coil. The wand emits, when brought into contact with the body, an electric ray, seen as a orange, reddish or violet beam, a fascinating phenomenon to watch.

Tesla himself used such a revivifying ray daily. While the MWO was never mass-produced, the violet-ray machine was actually commercially manufactured, and it became a fixture in many a doctor’s office and in many homes. Made available to the general public by a number of manufacturers in the 1920s and ’30s, one could mail-order the device from a Sears catalog. Not surprisingly, the advertising made sweeping cure-all claims. Eventually medicine organized to suppress this threatening alternative to its official line, which it labeled “quack,” but for a time both MWO and violet-ray flourished, and to such a degree that it still can’t be stamped out.

Like Tesla technology generally, this high-frequency electric healing technology still persists today world-wide and underground. Borderland Sciences made a big contribution to the perpetuation of the technology with the publication of Tom Brown’s MWO Handbook in 1986, which is now in its fourth edition. The violet-ray machines employed compact spark-gap oscillators or Tesla coils to generate the currents.

The most common ray-tube electrode was in the form of a wand with a flared end, but ray-tubes were also available in a wide variety of blown-glass shapes designed to accommodate any contour of the anatomy and to fit into any orifice. 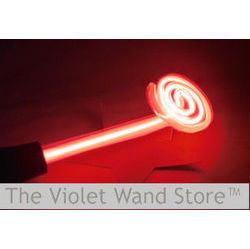 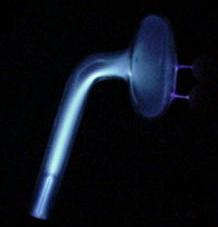 When appropriate inexpensive violet-ray electrodes were difficult to come by, experimenters found an alternative in an off-beat argon UV night-light bulb called the AR-1. I used one of these for many years. Fortunately, one does not have to resort to such improvisations, for today a few dealers continue to sell a mushroom violet-ray wand for as low as $7.00. (See for more information below.) Violet-rays have become a fashion in sex-fetish circles, which enhances the availability and affordability of the technology, as does the expanding popular interest in Tesla-coil building. You can connect a violet-ray wand to any powered-down spark Tesla coil. However there are some violet-ray and MWO appliances which are outrageously priced waiting to rip you off on the web.

The seer and healer Edgar Cayce recommended violet-ray electrotherapy for his patients in some 900 readings and for a tremendous variety of conditions, including arthritis, baldness, circulation problems, nerve, spinal and debilitation problems, sprains, eye disorders, and even possession.

I have yet to build the concentric-ring antenna or the MWO, but I have plenty of direct experience with the old AR1 violet-ray bulb, which I recently replaced with a wand. The violet ray has been my way of translating Tesla currents into the body. I connect the bulb or wand to the terminal of a Tesla coil. The Tesla coil can be a small low-power unit or a larger one moderated to low power by a variable transformer (variac). 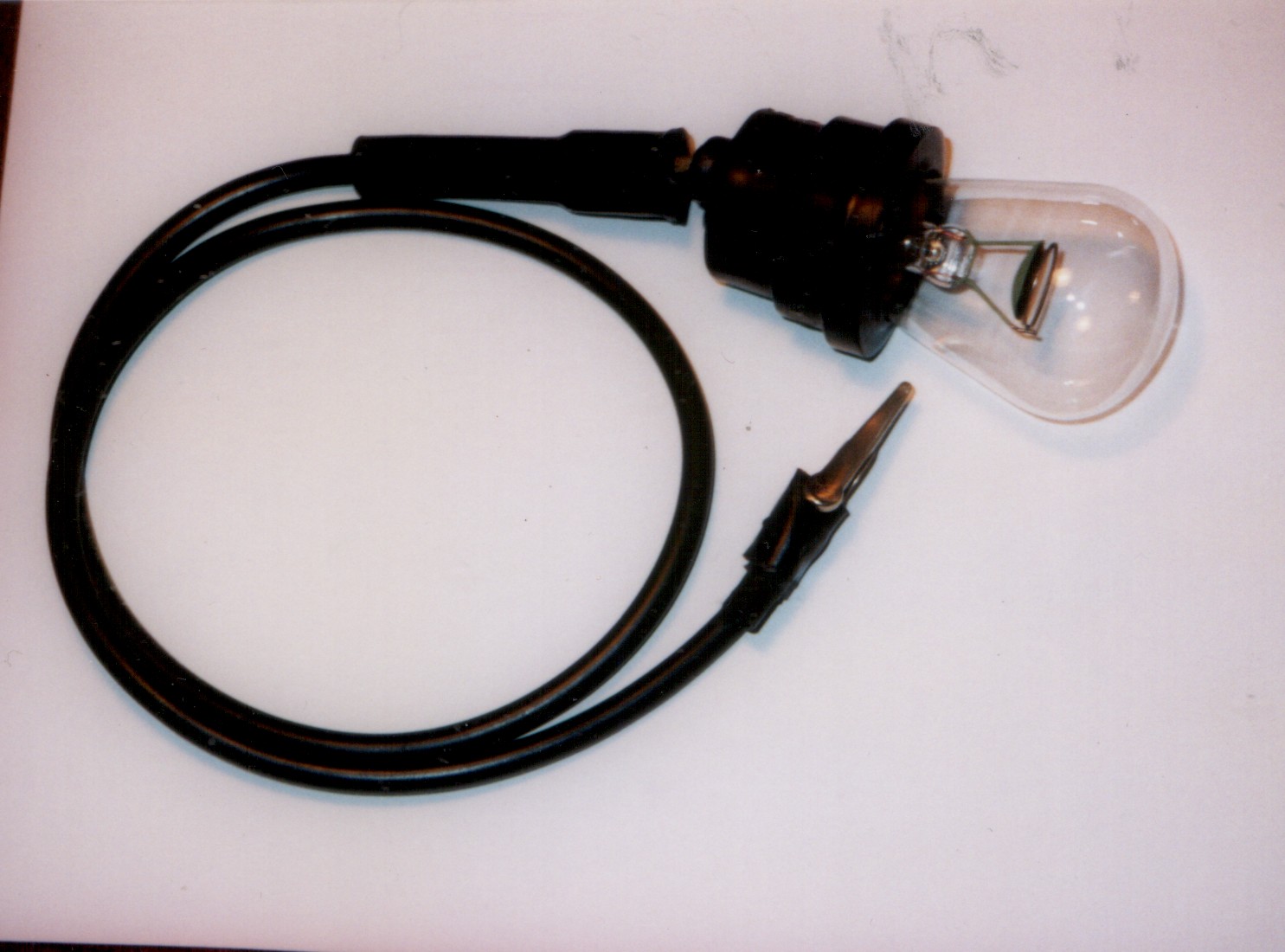 Immersion of the Tesla-coil secondary in an oil oil enhances the effect. I have experienced the value of oil immersion in the “recipe” oil coil described in detail in my book Son of Tesla Coil and shown on the Tesla Coil Page. For electrotherapy I’ve found it superior to any open helical secondary. It’s power can be felt, for it generates in the tissue a greater heating (diathermic) effect.

The Tesla coil should be spark-gap type. As an experiment, I drove my violet ray with the solid-state pulse unit detailed in Son of Tesla Coil. Unlike spark, which generates a broad spectrum of frequencies, the electronic driver supplies just a single-frequency of electric vibration to the wand. This produces a steady intense ray of different coloration, no crackle, and very hot. The diathermic effect is powerful, nearly burning, and lingers in the tissue for some minutes after use. Interesting experiment; this strange ray may have a use. But, for electrotherapy as I know it, I’ll stick with the tradition of spark.

I’ve also built and used extensively a little portable MWO coil designed by Bob Beck (12-volt solid-state-driven ignition coil, spark gap of auto points, tiny one-inch diameter secondary). Lately I prefer larger, hotter stationary coils, but powered down with a variac. My latest spark gap is also made from auto ignition points. The transformer (neon) is attenuated by the variac and is rated only 5 kv, 20 MA. The spark gap is about .004″.

If you want to experiement, the application time for ray bulb or wand can be from one to thirty minutes. Violet-ray devices should always be adjustable for intensity, the output being reduced when the diathermic effect is felt to be too hot.

Pacemakers and other Implants

Tesla-coil devices, including the violet-ray, can disturb or destroy the operation of any sensitive solid-state device, including  the cardiac pacemaker, so avoid Tesla currents if you have such an implant. By the same token, if I found myself implanted with an unwanted RFID chip or other electronic device, I would first try the violet ray in my effort to destroy it. Particularly vulnerable within integrated-circuit chips are the tiny capacitors whose dielectrics can be punctured by excessive voltages. The Tesla coil powers the violet-ray with voltages in the many thousands, safe for you at the high frequencies employed, but possibly fatal to any implanted mini-electronics. Tesla coils are inimical to computers and other solid-state electronics. My violet-ray apparatus often creates a little nuisance by erasing the recorded greeting in the solid-state answering machine across the room.

Holding the wand to my face with one hand I can grasp a florescent tube with the other, and the tube flickers. Electrifying. This is a way of experiencing the Tesla coil viscerally. As I put the fluorescent tube in the circuit, the increase in capacitive terminal load pulls up the voltage, and more so if I ground one end of the fluorescent.

The ray-wand crackles. The wand must be held firmly to the skin or sparks will arc from its corona, producing an irritating tickle. Fresh ozone is in the air. I admit to a dependency on these devices.

The ozone produced is one of the touted benefits, says electrotherapy inventor H.G. O’Neill in a patent of 1899 (No. 628,352): “Ozone in this nascent form is very much more energetic than in a free state and produces instant oxidation of all diseased matter. This form of asepsis is applicable to the entire tract of a wound or diseased surface at any depth. It is fatal to germ life and affords a means of internal asepsis.” Others have touted the release of heat in the tissues (diathermy), as well as an increase in the local blood supply and an increase in metabolic rate.