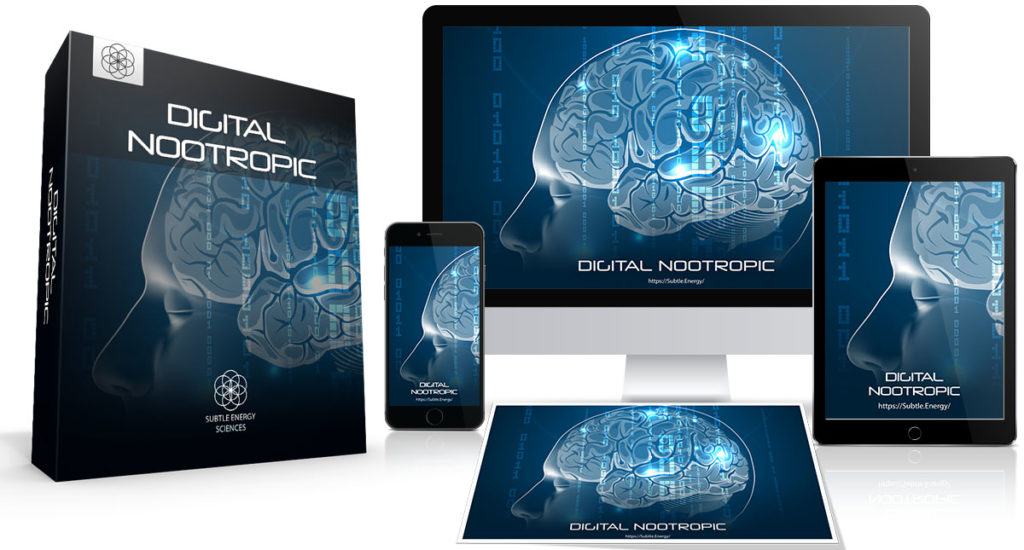 What is “Digital Nootropic”?

What is an Energetic Signature?

In his book, The Basic Code of the Universe, Dr. Massimo Citro speaks of a basic governing “code,” made up of “the ensemble of information that allows bodies to exist, the blueprint of the construction.” This code can be thought of as having both an informational component and an energetic component, the former informing a particular substance how to “be” itself, and the latter providing the subtle vehicle for the flow of that information. It is this basic governing code that we refer to as the “energetic signature” of a substance.

All of the energetic signatures featured in Digital Nootropic have been sampled from real, physical nootropic supplements using the highest quality ingredients available.

What to Expect with Digital Nootropic

When formulating Digital Nootropic, our intention was to create a synergistic blend of energetic signatures that help jump start you out of brain fog,  let go of procrastination and boost your energy, focus and mood so you can blast through hours of mentally demanding tasks with ease and enthusiasm, all without jitters or burnout.

Huperzine A – Huperzine A extracted  from Huperzia serrata – Huperzine A is a potent natural synaptic enzyme modulator. Studies indicate its ability to support learning, memory, neuroplasticity, and executive function.

Celastrus Paniculatus Seed Extract – Has been shown to enhance cognitive function by supporting memory and learning, and to protect the brain from oxidative damage and neurotoxicity.

Phosphatidylserine – (PS) – PS is a naturally occurring aminophospholipid found in high concentrations in the brain. Studies indicate its ability to reduce stress, fatigue, attention deficit and forgetfulness, and to increase mental processing speed and accuracy, attention and working memory.

Pregnenolone – Increases mood, motivation and brain function. It  is neuroprotective and enhances learning and memory, and increases the amount of deep sleep. Relieves anxiety and depression. Increases growth of neurons.

Pterostilbene bound to Caffeine – A next-generation caffeine alternative that delivers almost 30% more caffeine into the blood than ordinary caffeine, with the rate of caffeine absorption being significantly slower by about 30%.

Theobromine – Enhances blood flow and oxygenation to the brain and possesses long-term antioxidant properties. Reduces oxidative stress at the cellular level and has anti-inflammatory properties.

Acetyl-L-Carnitine – Acetyl-L-Carnitine is an acetylated form of L-carnitine with anti-aging, neuroprotective and nootropic effects. It decreases fatigue and improves attention, memory, learning and executive function.

N-Acetyl Tyrosine – Acetyl-L-Tyrosine is an acetylated form of the amino acid L-Tyrosine with nootropic effects. It increases attention, motivation and concentration, and improves memory and learning.

DL-Phenylalanine – DLPA is a mixture of two forms of the essential amino acid phenylalanine, the naturally occurring L-phenylalanine and the synthetic D-phenylalanine with nootropic effects. DLPA enhances mood and can increases alertness and improve memory and learning.

Taurine – Taurine is an organic amino sulfonic acid with nootropic and neuroprotective actions. It can improve memory and has anxiolytic effects.

L-Theanine – L-Theanine is an amino acid analog of glutamate and glutamine found in green tea from Camellia sinensis with neuroprotective effects. L-Theanine has anxiolytic activity and studies suggest that it may improve memory.

Pyrroloquinoline Quinone – PQQ is a quinone molecule with a potent anti-oxidant and neuroprotective effect. Studies indicate that PQQ can help prevent cognitive decline.

DHA (as Docosahexenoic Acid from Algae) – DHA is a structural omega-3 fatty acid with neuroprotective and nootropic effects. DHA has been shown to improve executive function, memory and learning.

Rhodiola Rosea Root – Rhodiola rosea is a flowering plant with nootropic and adaptogenic effects. Its biologically active compounds can improve memory and focus.

Vitamin B1 as Benfotiamine – Benfotiamine is a synthetic S-acyl derivative of vitamin B1 (thiamine) with neuroprotective effects. By increasing vitamin B1 levels, benfotiamine can increase energy, mood and alertness.

Vitamin B3 as Niacinamide – Nicotinamide is the amide form of vitamin B3 (nicotinic acid / niacin) that is naturally synthesized in the body with neuroprotective and anti-inflammatory effects. Experimental evidence indicates that nicotinamide can decrease age-associated cognitive impairment.

Vitamin B6 as Pyridoxal-5-Phosphate (P-5-P) – P-5-P is the most active form of vitamin B6, having significant nootropic effects. P-5-P plays an essential part in mood, memory formation, and executive functions.

Vitamin B12 as Methylcobalamin – Methylcobalamin is a methylated and active form of vitamin b12 (cobalamin) with strong neuroprotective and anti-aging effects. Methylcobalamin’s effects include improved memory and executive function, as well as enhanced focus.

Vitamin D3 as Microencapsulated Cholecalciferol – Cholecalciferol is a form of vitamin D (vitamin D3) with antioxidant and neuroprotective effects. Research indicates that it may contribute to delaying neurodegenerative and age-associated cognitive decline.

Citicoline (CDP Choline) – CDP Choline is a compound made up of choline and cytidine with neuroprotective and nootropic activity. CDP Choline decreases age-related memory impairment and cognitive decline, and enhances attention, learning and memory.

Alpha GPC – Alpha-GPC is a compound made up of choline and glycerophosphate with neuroprotective activity. Alpha-GPC prevents cognitive decline, and increases attention and memory.