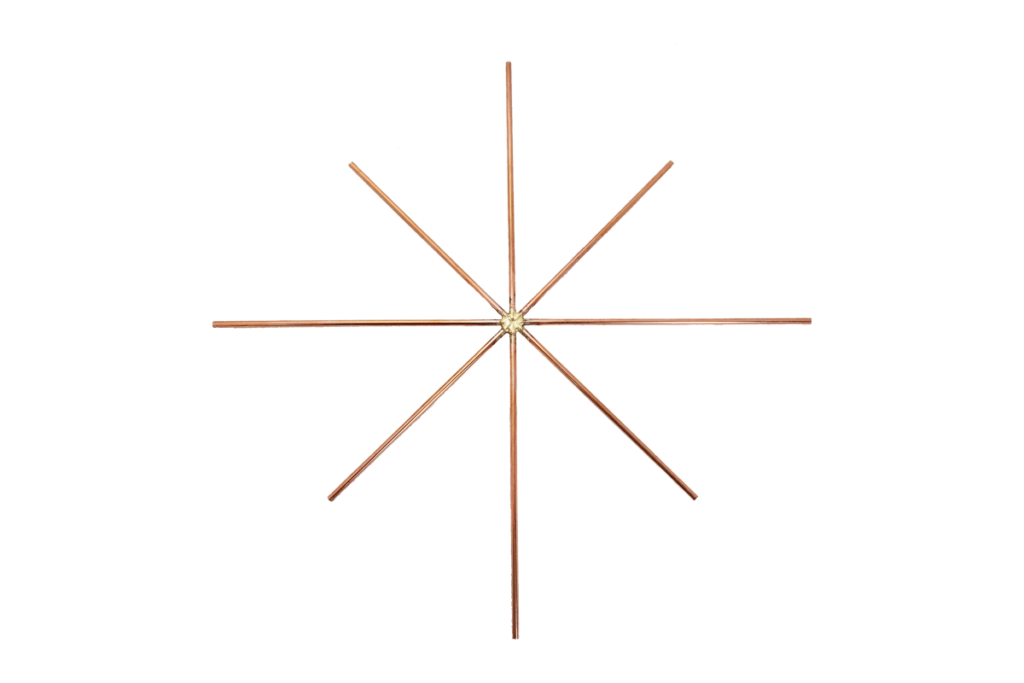 Creates a 360° Sunburst of energy

The Starburst is carrying much of the same energy as the Golden Fire Generators carry, and more! Expands out in all directions over a city block wide, including upwards and into the Earth, and the field tapers off after the one block radius.

It clears Geomagnetic lines, and follows the lines outward to clear the source of non beneficial energies, within the local area.
Such as putting them near an electrical substation or electrical transformer, clearing all geomagnetic as well as electrical lines.

Water is a big Part of this Tool’s Purpose

You can use the Starburst under your water containers, though we still recommend using a Tensor Ring, specifically one of the Water Rings for working with your water. Any water within the field of the Starburst will be affected!

Connects into chest and into the Heart. Brings through all the Activations and Attunements of the Golden Fire tools and that the Golden Light Wand offers.

Bill Reid was the original creator of the Starburst as a physical energy tool.

The Starburst was based on Doug Benjamin’s findings of specific Cubit lengths from the Great Pyramid. Doug then taught people how to use two of these Cubit length rods to pin into the ground at the Cardinal and Ordinal points around an area to neutralize geopathic stress zones. More about Bill Reid and the original Starburst here.

Slim Spurling and Bill Reid brought Doug’s techniques into the more mainstream, where architect Simon Bialobroda came up with a concept of using these sacred proportions in an 8-pointed star. This mathematically ratioed symbol was secretly used in ancient Templar societies.

For information on Bill’s inspiration for the Starburst, I have shared the Simon Bialobroda article, from Bill’s Gravitobiology text book, here.
The measurements Simon shares come from the research of Doug Benjamin. A link to an article from Doug can be found at http://www.sacredmeasures.com/measurements.html

Douglas Benjamin’s work is where Slim and Bill found the Pyramid measures used in the original Light-Life Ring, as well as the straight-line cubit measures used in Bill’s Starburst tool. As Light-Life Ring is a registered trademark of Slim’s widow, the generic term of Tensor Ring was coined by Brian Besco through the guidance of the authors of Dancing With Water: The New Science of Water.

After taking Bill Reid’s class several years ago, I was guided to recreate the Starburst with different Cubit measures, and then dropped one of the intersecting rods down from the center with the Phi Ratio,
where “UhnTok- the Key” came into being. The UhnTok was the Ankh of that Now Time, at the cusp of the old and new world energies.

We made a few versions of the Keys, including the Atlantian Key,
the Manifestation Key, and the Goddess Keys. I stopped making the Keys as we began shifting more and more into the new energy.

The Starburst, and the Keys, did not have Etheric Templates like our Tensor Rings do.

They were simply Straight-lined Cubit measures and sacred symbols.
Bill’s Starburst utilized a Tensor Ring to amplify and hold beneficial energies. Even the Keys could be used for nonbenefical energy transfers by the right user. This has been traditionally inherent with the Straight-line Cubit measures.

The Golden Light Wand and the Golden Fire Wand, though, both have an energetic counterpart that ensure they are healthful and beneficial to all.
These are the two that were put together to form the new Starburst.
The copper-coated steel rods, once welded together, created something more than the Wands separately.

The energetic properties of both the Golden Light and the Golden Fire Wands are still present in the new Starburst, and now the Starburst has an Etheric Template also created for it!!

My sister Brenda and I held space as the new Template was created for the Starburst,

And it was taken back to the time of the initiates and the first use of the symbol, where the Starburst Template was harmonized with those symbols and brought forward to here and now. A powerful process….