The Bion Experiments of Dr Wilhelm Reich by Alison Davidson 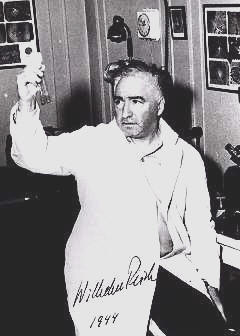 Dr Reich’s search for life energy, for the intangible, incomprehensible something which animates living matter, resulted in his bion experiments of 1937 to 1939.

He discovered that during the disintegration of food and other organic matter, tiny luminous vesicles were produced that were capable of culture under very strict and sterile conditions. Under microscopic magnification of 2000-3000X these vesicles, or bions as Reich called them, moved through k e microscopic field with pulsating movements and always showed a bluish colour, no matter what substance they were derived from.

From “The Discovery of the Orgone” Reich lists the following facts for an understanding of the bions as they emerged during his experiments:

1. All matter- if exposed to high temperatures and made to swell- undergoes a process of vesicular disintegration. .
2. High temperatures (autoclavation at 120 degrees C, heating to incandescence, bout 1500 degrees C) destroy what life there is. But these same high temperatures produce the energy vesicles which in turn can develop into living bacteria.
3. The energy at work in the bions is not introduced into them artificially rather, it originates from the vesicular disintegration of matter itself.
4. An energy vesicle is a minutes quantity of matter, containing a quantity of energy derived from this matter.
5. The bions are not complete living beings, but energy; they are forms of transition from non-living
6. The blue colour of the content is the immediate expression of this energy. As the blue disappears, the essential biological characteristics of the bions disappear also.
7. The bion experiments do not newly ‘create’ artificial life; they only demonstrate the natural process by which protozoa and cancer cells develop spontaneously from vesicularly disintegrated matter. They also demonstrate the natural form in which biological energy is contained in humus, in inorganic material, in foodstuffs, blood cells, gonadal cells, etc.

Dr Reich discovered that bions which emanate a strong blue glimmer kill or paralyze bacteria and small protozoa. They destroy cancer tissue by permeating it, even at a distance.

All of these functions pointed to enormous energies which are contained in the bions and have a powerful effect n the surroundings. How powerful these energies were Reich was to discover in his subsequent experiments with the SAPA bions, and their dramatic effect in his laboratory.

To completely refute the objections that so-called ‘air germs’ were a contaminating source of the life-forms emerging from disintegrating mineral and plant substances, Reich began to heat coal and earth crystals to incandescence before putting them into the solution which promotes swelling. Still the bions appeared, their formation accelerated by the intense heat.

“Now, with complete sterility assured, the bionous disintegration of matter could be achieved within a few minutes. No longer did I have to wait for days or weeks until the process of swelling at room temperature finally resulted in bions … For more than 2 years, experiment after experiment confirmed the bionous disintegration of matter and the organization of bacteria and cells from the bions.”

It was in January 1939 that one of Reich’s assistants demonstrated the heating experiment to a visitor of the laboratory. Taking the wrong container from the sterilizer, she heated ocean sand instead of earth. After 2 days there was a growth in the solution which–resulted in a culture of large, slightly mobile, intensely blue packets of energy vesicles. At 400X, they looked like sarcinae as occasionally found in water. 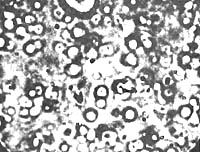 “The effect of the SAPA bions on protozoa, bacilli in general and T-bacilli in particular, was much stronger than that of other bions. Brought together with cancer cells, they killed or paralyzed the cells even at a distance of about 10 microns. When cancer cells came as close as that to the bions, they would remain as if paralyzed, in one spot; they would turn around and around in the same spot and finally become immobile. These phenomena were recorded by microfilm.”

The effect of the SAPA bions on Reich himself was even more dramatic. During the winter of 1939 he studied the bions daily for several hours. His eyes hurt from looking into the micros.cope and he developed a violent conjunctivitis. Any close contact with the cultures resulted in pain and inflammation of the skin, and although Reich hadn’t been in the sun during these winter experiments his body was strongly tanned. By now, Reich knew he was dealing with some kind of radiation.

He sought help from the radium physicist of the Cancer Hospital in Oslo, Dr. Moxnes, who tested a culture with the radium electroscope. There was no reaction. Yet the radiation from the bion cultures seemed to be present everywhere in the laboratory. He tried observing the cultures in dark basement rooms, making dozens of cultures to increase the intensity. A grey-blue light permeated from the darkness and violet light phenomena seemed to emanate from the walls.

One evening after spending several hours in the basement, Reich could see the blue glimmer visible as a slowly moving, grey-blue vapour around his body and other objects in the room. It was a frightening experience, for he radiation seemed to be everywhere and pervade everything.

Through subsequent experimenting with other subjects as well as himself, Reich came to the conclusion that the radiation had to do with sun energy. If it was present everywhere, it had to come from the sun.

“The SAPA bions had originated from ocean sand. Ocean sand, however, is nothing but solidified sun energy. The process of heating and swelling had liberated the energy from the matter… The existence of an energy with an extraordinarily intense biological activity could no longer be doubted.”

He tried shielding the energy by building a metal-lined box in which he expected to be able to confine and control the radiation from the bions – a logical technical step to take under conventional concepts of radiation. But he was astounded to find that this box intensified the radiation effects. With this energy appearing everywhere and in everything, there seemed to be no defense against it. Reich realized that the energy was universally present, and that the bions had simply brought this energy into focus by local intensification.

In ‘The Cosmic Pulse of Life’ Trevor Constable comments further on these experiments: “Dr Reich identified this energy with the galvanic energies present at the skin surface. Later on in America (1939-40) he discovered the presence of the energy in the atmosphere as a primordial, mass-free energy. He found this same energy also present in blood that was allowed to disintegrate. The connection to the single spot of -dried blood, held in a blotting paper as a tuning crystal in Dr Ruth Drown’s work, will automatically commend itself to the reader at this point. The two titans unbeknown to each other, were treading parallel paths. 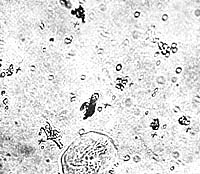 “The presence of orgone energy in disintegrated blood verifies from yet another angle the access given to the life energy continuum by the much-ridiculed single spot of blood.

“Dr Reich called this energy orgone to identify it permanently with things organic, with the orgasm and with life. He proved its existence visually, thermically, electroscopically, and later on, at the Geiger-Muller counter and by lumination in vacor tubes. He was able to develop protozoa fom the bions. This led him into cancer research-,-impelled by- the prevision that cancer might have a similar origin …”

It is a sad testimony to modern mechanistic science, that Reich’s bion work and discovery of the orgone energy was subjected to hostility and irrational attacks by the established scientific and medical authorities. Reich showed conclusively that life can form spontaneously from inorganic matter, that universal energy can be tapped and measured, that free from prejudice and sterile conditioning we can begin to explore and understand the source and expression of life energy. From that basis a new science is now emerging, affirming the connection that exists between everything in the universe just as the ancient life-affirming religions taught.

The FDA may have destroyed Reich, but just as he showed to the world life appearing out of inert matter, so the seeds of his research are flourishing in the crumbling fortresses of life-negating science.

Reprinted from THE MORLEY-MARTIN EXPERIMENTS and THE EXPERIMENTS OF DR. CHARLES w. LITTLEFIELD published by BSRF, first printing 1950, revised edition 1986. This research compilation is a prime piece of evidence showing the living etheric force hidden in dense matter.

Trevor Constable writes in COSMIC PULSE OF LIFE, ‘”Under conditions of total sterility he (Morley-Martin) proved in the 1930’s that animal forms exist in and can be awakened from azoic rocks. Such devastating findings wreak havoc upon the neurotic security of those whose whole world conception rests upon the opposite.” Morley-Martin is less known than Wilhelm Reich, but the work of both of these men is in accord with the concept of the living universe.

This article was sourced from:  The Journal of Borderland Research Vol XLIV, No. 2 MARCH-APRIL 1988