Vogel and the De-LaWarr Radionic Camera

One of the projects I worked on with Marcel was a Inter-dimensional Imaging Device called the DeLaWarr Camera, which was imported from England to the lab. This device stood over 5 feet tall and the internal workings were beautifully machined out of brass. My background with radionics started a long time ago when I first completely reverse engineered a radionic device that was written about in Fate magazine. The exact device the article had written about, I had for a short time in my possession. The article said, that it could take a photograph of a field that was being destroyed by insects and selectively broadcast an insecticide to a polaroid photo of the field which was cut in half. The results claimed that the half of the infested field, which the device broadcast to, had affected the insects and they were dying, while the other half of the photographed field, that the device was not attuned to, was unaffected.

Those who understand the mechanisms of consciousness through a radionic type device, know that, what you do to others, you do to yourself. If your intent is to hurt someone or even kill bugs as spoke of in the first device I studied, that vibration you take into your own personal consciousness matrix. As Indian Chief Seattle put it well “Humankind has not woven the web of life, we are but one thread within it. Whatever we do to the web, we do to ourselves. All things are bound together. All things connect.

Discovering that the instrument was nothing more than a 2 stage vacuum tube amplifier, with it’s input connected to the witness well and the output to an extended antenna, I became suspicious that something more was at work here. Consequently, I have built a Hieronymus type of radionic instrument using a tunable quartz prism, then a Bruce Copen design of 9 dial instruments, and even a gem therapy radionic instrument as well as other types of radionic type equipment. What I have found is that in essence the radionic instrument is nothing in itself, but merely a tuning focus for the mind, and that everything hinges around intent and that just about anything can be created into a radionic instrument. As Ruth Drown stated, “everything in the universe is here now, all we have to do is tune into it”. A radionic instrument merely provides a method of ratio tuning the holographically-based universe by taking a witness, such as a photograph or drop of blood from a person and using a feedback mechanism such as a pendulum or membrane pad that is rubbed called a stick pad. Then the person’s resonant frequency or sometimes called personal rate in radionics, is attuned to.

In the matrix of consciousness, which we all share, everyone does this everyday whenever you think of someone you are attuning to them. Using a radionic instrument to attune with a feedback element, you could say, coheres the thought form into resonance in the radionic device. Then you can take your thought focus and go elsewhere once you have crystallized, you could say, your thoughts into the device, which will continue to broadcast or radiate to the witness. The dials can be set to different degrees of rotations, these rotations of 0-9 give the reference numbers that are called radionic “rates” . These rates, various individuals have categorized, such as Abrams, Copen, Drown etc. But these individually created instruments have their own “agreed upon reality” from their creators for the various rate numbers. Therefore, anyone can make anything, but not everyone can make any of these instruments work. It is a faculty which everyone has, but it appears some individuals can use this ability better than others. Also it should be noted that those who have the most effective devices are those in which the individual has created from their own inspiration of design. Never-the-less, the common denominator of all this, is that even though the designs and the rates differ, they all seem to be able to give a validity to the concept that time and space is contained within the holographically-based universe and that a witness (drop of blood, hair, signature, photograph etc.) is a microcosmic holographic link to it’s macrocosmic whole.

In regards to radionic instruments ability to lock-in or cohere a thought pattern. De La Warr was reported that he once did an experiment with tuning the instrument to the rate or frequency of the metal lead with a small amount of the lead material as the target. The amount of lead was weighed beforehand, and after several hours was weighed again and it was noted that it had gained in mass slightly. This could be an indication that thought, once cohered, can start to take physical form.

The purpose on this project with Marcel was to understand the principles at work within the camera and to incorporate current technology to reproduce the images which could attune to an individual through the use of a witness. A witness with the camera, such as a drop of blood, represents a holographic connection to the individual anywhere throughout the holographic nature of the matrix of creatiion, regardless of time and space. Through the geometrical alignment of the radionic tuning to a specific aspect of the individual, with the additional parameter of the element of time, using the time spiral, an image could be captured in the silver emulsion of film regardless of time and space.

The theories of a holographically-based universe were originally championed by two of the world’s most eminent thinkers: physicist David Bohm, a protégé of Einstein’s, and Karl Pribram, a highly-respected neurophysiologist from Stanford University. Their holographic model received dramatic experimental support in 1982 when a research team led by physicist Alain Aspect in Paris demonstrated that the web of subatomic particles that compose our physical universe, possesses what appears to be an undeniable “holographic” property.

Although science in the future may look back at these archaic interdimensional holographic matrix attuned image recorders and put them in a place of merit in a museum of science history. This science project I worked on in the 1980’s was more like an episode in the Outer Limits than what is currently acceptable science.

The Radionic Camera developed in the 1950s by George DeLaWarr was capable of imaging the past and the future, and he published thousands of photographs demonstrating the effect.

In the opinion of DeLaWarr, “Time is a vector of the magnetic spectrum and that spectrum has a place in itself for events… There is a pre-physical world in which the camera might be expected to operate”.

I worked with two other associates on this project with Marcel and in my study of the blue prints, I found that the resonant wooden cavity was based on a 1.618 or golden mean ratio. I was with Marcel when he charged the plates and took the first images on the camera since it was last used in the 50’s at the DeLaWarr Laboratories. The image we produced appeared to look like an X-Ray diffraction pattern, but imagery like DeLaWarr was able to produce, we were not able to.

Briefly, the procedure in using the instrument was to align it with magnetic north and then the blood spot or witness placed on the witness plate, then a magnet between the plates was to be rotated until resonant. The 9 dials were tuned to the specific rate of what was to be photographed and the 7 turn Time Spiral tuned to the proper time band. The switch was thrown and the audio oscillators inside the unit vibrated the cavity (Here you could associate the element of sound with matter coming into manesfestion) The energy from the 3 sections then went up into the upper housing which had 3 sets of reflectors and lenses that focused the energy back reflecting onto the photographic plate to record the image. Below is a sample image that DeLaWarr took, one of over 10,000 that he photographed with the camera. 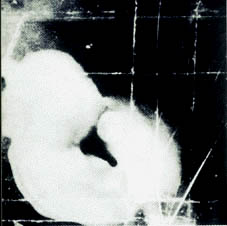 The above original DelaWarr photograph was taken at the request of a distant patient who wished to determine her precise stage of pregnancy. The photograph reflected the fetal development between 8 and 12 weeks gestation (later confirmed by delivery date). A significant amount of skeletal structure can be seen in this image.

Below are diagrams of the unit from the European Patent Office 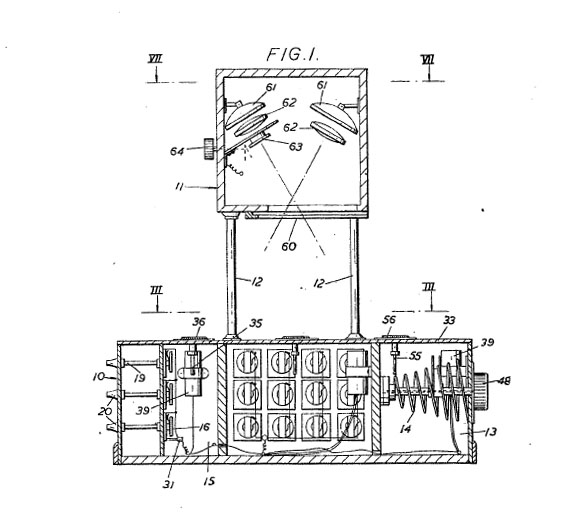 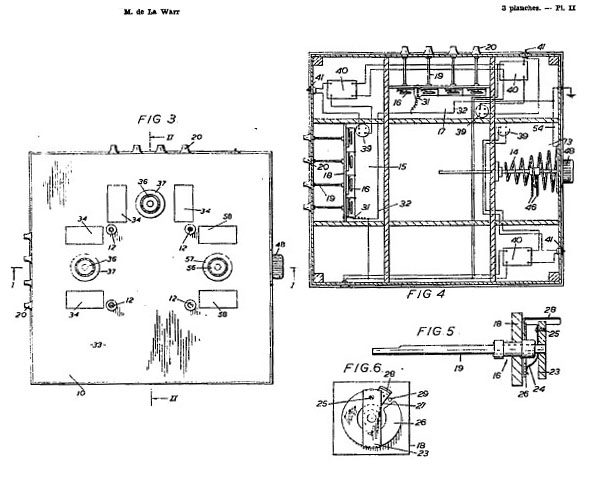 The following photos I took while working with the camera 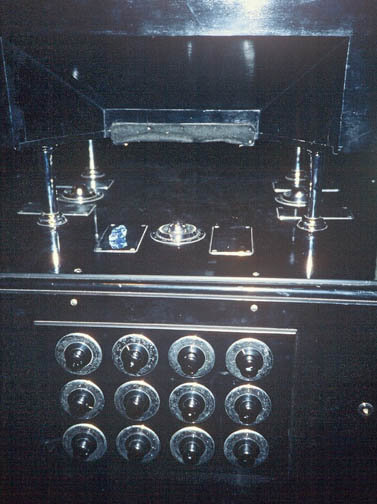 Witness plates with a rotational magnetic adjustment between them 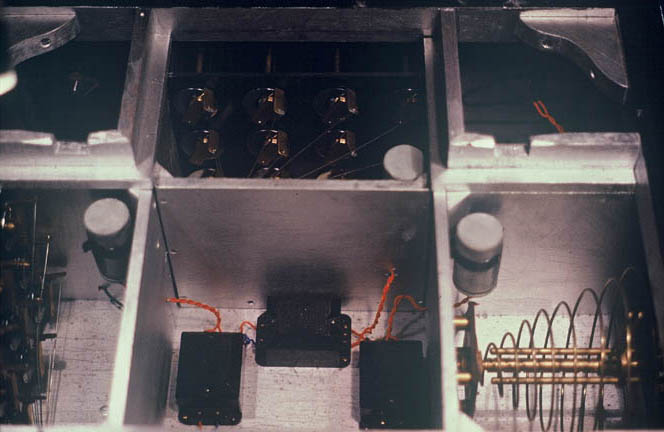 Inside the camera I measured the dimensions and discovered the entire cavity ratio to be the Golden Mean 1.618 ratio which the round sound resonators oscillated 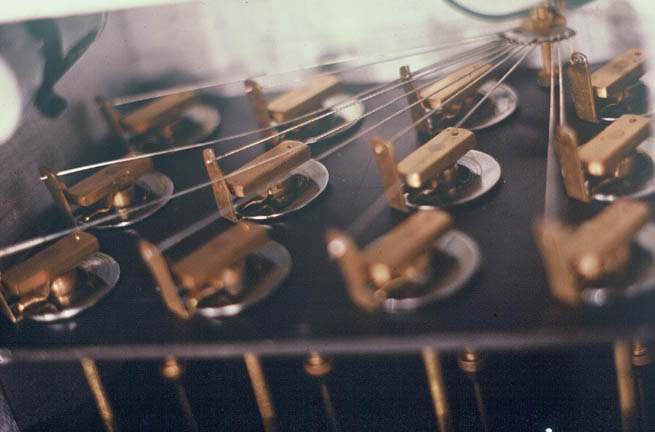 The radionic dials are tuned to resonance through the principle that everything is enfolded into everything, and that any aspect of the whole can be attuned to as a divisional ratio of that whole. 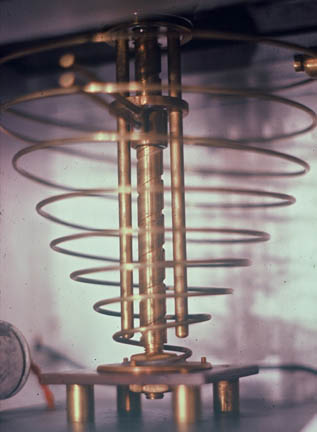 The unique element of the DelaWarr Camera from other radionic devices is the incorporation of a Time Spiral of 7 turns in which the witness once attuned to could resonate at a different place in time to take a photograph in the past or in the future. 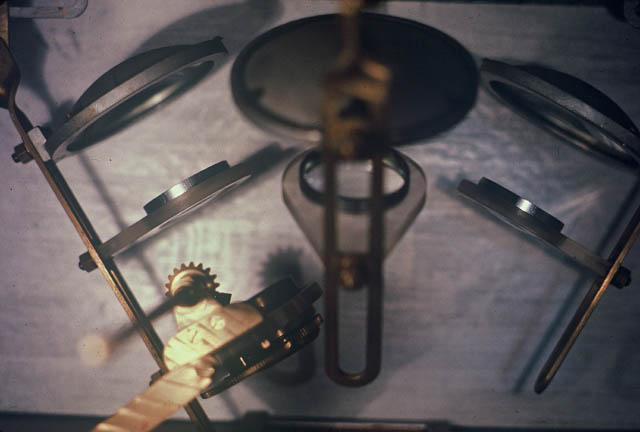 Once the witness was attuned to and amplified using the magnetic rotational dial and the sound resonators oscillating. The dials would be rotated and attuned to the aspect of the witness to photograph. If a time element of that aspect wanted to be photographed then the Time Spiral would be attuned to. These subtle oscillations would be projected upward in 3 axes into the separate compartment above which held the photographic plate. Above the plate 3 assemblies of lens and reflectors focused the energy back onto the photographic plate in which the silver emulsion on the film responded to and captured the image.