Ken Wheeler on the Lost Pythagorean Secrets of the Golden Ratio 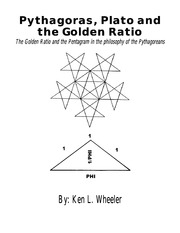 Through Ken Wheeler’s lecture series on Magnetism and his books “Uncovering the Missing Secrets of Magnetism“, “The Indefinite Dyad in Plotinus’ Metaphysics & Mysticism“, & “Pythagoras, Plato, & the Golden Ratio“, he describes the role of magnetism and gravity as expressions of dielectricity in a conjugate universe. As a linguist and meta-physician, he has re-envisioned modern physics with Platonic Logic. His work, if taken seriously, provides much support to the theories of Walter Russell. Below you will see a collection of Videos where Ken describes the lost Pythagorean secrets of incommensurability and the golden ratio.

Here is Ken’s Description of the first video in the playlist.

“Pythagoras, Plato, and Plotinus after them were well aware, by their intense study of geometry and nature, the Golden section. The purpose of this very small but pithy book is to examine some key passages of Plato and the Phi incommensurability of the Pythagorean pentagram and unveil a heretofore unknown ‘secret’ rediscovered which links the Golden ratio, Pythagoras, the ontological preeminence of the pentagram, and the two most important passages in the Republic of Plato all together. I will show that the Emanationist philosophy/religion of the Platonists employed the Golden ratio into both a “Divided Line” analogy and the “Cave” symbolism to show the variant degrees of proportion and ratio between the visible (aisthetos) and intelligible (noetos) kosmos in a divine Logos (proportion) of which the Monad is Arche. Also I hope to demonstrate that the “Pythagorean oath”, the tetraktys was shown only inside a special ‘Pythagorean triangle’, the 1-1-Phi triangle which is not only the “triple intertwined triangle” of the pentagram, but also the 1-1-Phi-1/Phi analogy of Plato’s Cave and Divided line symbolism for the totality of all things.

The Logos (proportion) which comprises the visible and intelligible, I hope to show, formed the foundational doctrine of the Pythagoreans and Platonists who despised all who were “ignorant of geometry” to partake of their instruction, for “As above, so below”, the Platonists before and after understood the “third thing which unified” was a Logos of the Monad, geometrically and arithmetically represented by a power of Phi, which itself is the logos of the necessary emanation of the Monad.

Phi is the ratio and relationship of the Monad to its increasingly phenomenal self-image in emanation. “But employing the objects of which the shadows below are resemblances in their turn as images”[Rep. 509]; thru the many ages of nature study the Pythagoreans understood that all nature exhibits a Logos (proportion) to a Principle (1), and this very special ratio was Phi (1 to 1.618033), and so being the case, the 2nd and 3rd Hypostases (the Nous and the Psyche tou pantos [world soul]), though noetic, MUST exhibit this same proportion. After who knows how long a time, the symbolism and analogies I mention below will spell out that which the Emanationists settled upon as the visible models for their knowledge of the ordered kosmos into powers and or proportions of Phi.

One very special triangle, its significance uncovered for the first time here in this book, serves as the model for the tetraktys, the pentagram, the Divided line, and the Cave analogies, and its geometers contain the seven sections of Platonic totality. The 1-1-Phi ‘Pythagorean triangle’, the 108-36-36 degrees isosceles triangle. At no time does this book affiliate its discussion with the bastardization of the pentagram in meaning and usage, or the theology of numbers with those groups as commonly denoted in the practice of the white-lighter new-age movement, but only to the root meaning and importance as taught by the Pythagoreans alone, of which the author is certain, is the only point of relevance or importance.

For further specifics on Phi as its pertains to phenomena, art, and proportions in living things, there are several books worthy of purchase. The effort here however is to unravel the heretofore unmentioned ontological and philosophical principles which varying powers of Phi represented in the models, symbols, and analogies of the Pythagoreans and Platonists, and lastly, for the first time anywhere in print, to have provided a brief overview of what exactly the philosophical meaning of Phi represents, both on its own, and in the mind of the Platonists who never tired of cogitating upon ratios, harmonies, proportions and the Phi principle which underlies the very logos of the Absolute, the Divine Monad.” – Ken L. Wheeler