How an Organism Takes Shape by Noel Huntely

One of the mysteries in the science of biology today is how a living entity acquires its form. It is considered that the DNA will eventually reveal this missing information, and as we shall see this is both correct and incorrect depending on the context. In fact, the information in the DNA strands is so complex that we sometimes refer to such systems as random. However, what we shall be mainly concerned with here is specifically how the geometry of a living organism takes effect. [1]

A  full description of even  some of the subsidiary concepts involved here is not possible since we are considering processes which
generalize to all fundamental systems of mind, life, and the universe; for example, how minds communicate verbally (from concepts}, how
physical mobility is achieved in musculature system, and even how advanced extraterrestrial propulsion systems work (which are based
on nature’s universal processes).

This information is not being presented in a form suitable for the orthodox scientist since there will not be the space to justify the concepts; it will be assumed the reader already has some familiarity, such as with the nature of the vortex. 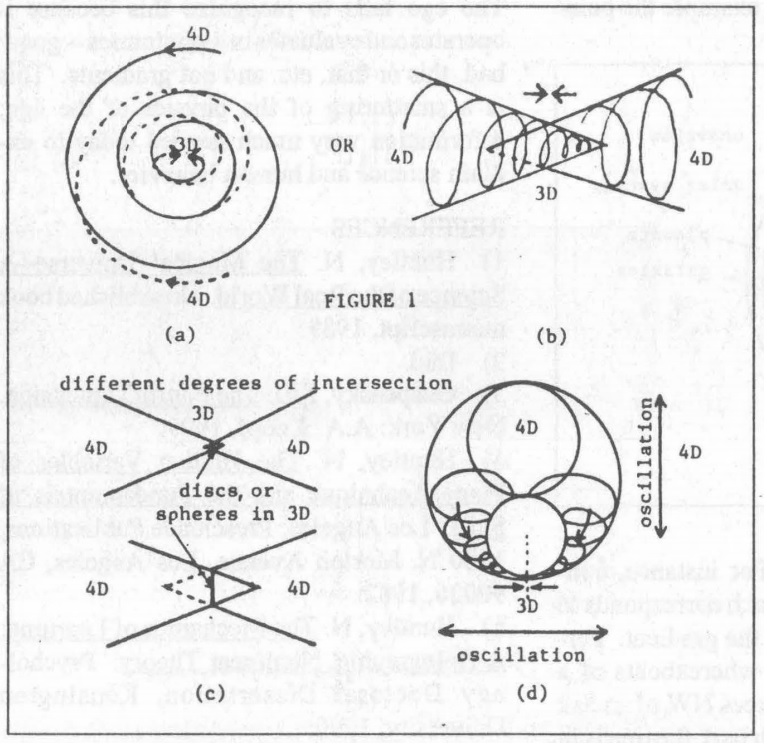 All creation begins with a higher-dimensional vortex which we shall refer to as 4th dimensional since this is sufficient for our purposes. We would picture this as spherical, and larger than the final product to be. A very crude analogy, but possibly helpful, is that of a sculptor who works in stone. He begins with a block larger than the final object which we can imagine as, say, a figurine at the center of the block. Envisage the block of stone as spherical, corresponding to the vortex. An experienced artist will chip away surface layers of stone gradually going· from a generalized state to one of increasing degrees of specificity to the final specification at the surface of the figurine.

Imagine thin layers all around being peeled off, very gradually manifesting the outline of the final product. One should think of these layers to be fields (within fields) and present even when the product is complete.

Now let us return to the vortex. We know that a vortex spirals inward, but remember that it requires 4th-dimensional geometry to understand its periphery. In 4D, this means that the spiral can take two directions towards the center. These directions become more opposite nearer the center and meet, creating a standing-wave structure. [2] This is the true higher-dimensional form of the double helix spiral — see the diagrams in Figure 1.

This is also the basic unit of wholeness for all entities; atoms, cells, organs, planets, solar systems, galaxies, universe, etc. The famous Russian philosopher Ouspensky once dreamt he had discovered the secret of the universe. The following morning, on examining the sketch he had made during the night, found it to be one which is identical to (d) in Figure 1 but without the spirals. [3]

Now let us picture this 4D spherical vortex spiralling inwards. Recognize that the spiral is immensely fine. In fact, because of this, mathematically it can be modelled as consisting of countless concentric spheres. These are not peripheries but spheres one inside the other on a gradient 4D to 3D; each is a quantum field and fractionally different from its neighbor. Moreover, each is a field of context for all ”lower’ – fields — none must be missing or out of harmonic alignment or chaos will result. Now consider an intermediate stage which can be analogued from the blowing of soap bubbles 4th in the rare occurrence a whole group is formed of intersecting bubbles of different sizes. The vortex has divided into smaller ones; this is the nature of quantum reduction – see Figure 2.

Note that shaping of the organism can now begin to take place according to the magnitude of the radii of the spheres and also the degree of intersection (phase relation of the oscillations). We mentioned earlier that the spirals take two paths inward and meet somewhere in the center. If they meet at a minute point in the center we get the appearance in 3D of a particle or the fundamental oscillation (stationary state) of an atom (these are actually nodes– center region of the sine wave). However, according to the program or blueprint — modulations within the holisitic waves– in the 4D periphery of the vortex, these two spirals can meet much sooner, creating a greater area of intersection — study Figure 1 (c). These ·areas of intersection are stable standing-waves structures — they are oscillating in and out of our 3D matrix. The
larger ones act as a guide for the smaller ones within. This is achieved by resonance due to ·harmonic relationships. These stationary wave structures between the large vortex and the smallest within, are fractal levels — another mystery in current science. With some effort of the imagination we see that any shape whatsoever can be created by adjusting two variables: 1) radius of the intersecting spheres, and 2) phase relations of the sine waves representing their oscillations– see Figure 3. 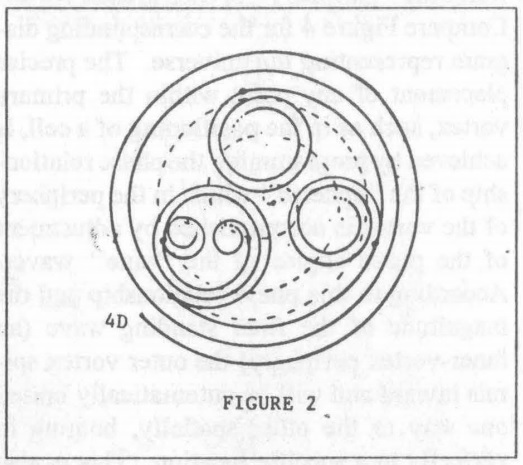 Remember that only the smallest oscillations are fully in 3D and detectable with orthodox scientific methods and ego perception but all these” spheres” are true wholes or quantum states going into higher orders towards the’ ‘periphery” of each greater vortex . Compare Figure 4 for the corresponding diagram representing the universe. The precise placement of any point within the primary vortex, such as in the positioning of a cell, is achieved by programming the phase relationship of the “spheres” which in the periphery of the vortex is accomplished by adjustment of the phase angles of the “sine” waves. According to this phase relationship and the magnitude of the final standing wave (an inner-vortex periphery) the outer vortex spirals inward and will be automatically biased one way or the other spatially, homing in perfectly to a specific location. This is also how extraterrestrials navigate to a coordinate point during teleportation and also how, for example, a pianist instantly locates, when desired, a point of information in, say, part of a longer movement during whole complex
coordinations.[4]

In reality we thus have two conditions: 1) the DNA which we know contains information for the regulation and maintenance of the organism, and 2) a higher-dimensional blueprint or spiritual ”seed” which contains infinitely greater probable information in the modulations of its sine waves in its 4D periphery.

The DNA thus provides the 3D control, and by sending its resonances up through the gradient spiral of the vortex, meeting at every level the basic program of higher-dimensional information, selection of probabilities takes place. As one goes from the outside to the inside, probabilities from the most general state are under continuous selection all the way towards complete and singular specification of each particle in 3D (quantum reduction). The DNA is necessary to precipitate the gradient (4D to 3D) into 3D specification. This is achieved entirely by resonance of information from one level to the next (the process is complex beyond imagination). Because the gradient is so fine the transmission of information is difficult to grasp. If we take a fictitious and more blatant example the point becomes more obvious. For instance, consider persons A, Band C; each corresponds to quantum fields adjacent in the gradient. Person A knows the specific whereabouts of a buried treasure, say 50 degrees NW of an oak tree. Person B knows which park the tree is in (nothing else), and C which town the park is
in. There are several trees, parks, and towns, etc. The information which each has is necessary to locate the treasure beginning at the large ”quantum state”, the town. Each piece of information is a context for the next” lower” information. In this manner, the most complex processes of nature can be handled including the highest abilities of coordination involved in physical mobility. [5] 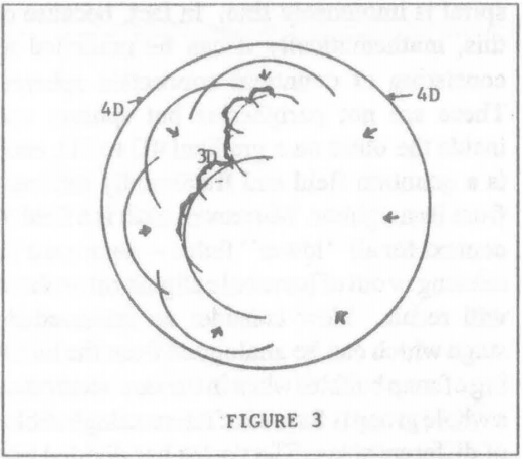 Now owing to the relationship· of these quantum fields which are holistic and holographic, [6 ]if one looked deeply enough within
the DNA going into higher-dimensional space one would in fact contact the source; in other words, the DNA would be found to contain the
information for formative processes (but by a stretch of the imagination). Thus even the question posed earlier about this requires the
correct context. Everything works in the relationship (the context) of something else. The ego fails to recognize this because it operates and evaluates in dichotomies– good/ bad, this or that, etc. and not gradients. This is a smattering of the physics . of the ego; information very much needed today to explain science and human behavior.

This article was sourced from the Journal of Borderland Research Vol. XLVII, No. 5 September-October 1991

A collection of Journal of Borderland Research Volumes can be downloaded here: http://bit.ly/2L5cGWo