IMAGINE STANDING UNDER A VAST, SCINTILLATING AURORA BOREALIS, and seeing it change colors as you changed your thoughts. This exact situation led Russian medical doctor Alexander V. Trofimov into his groundbreaking research on human consciousness, in collaboration with Vlail P. Kaznacheev, and following in the footsteps of the great 20th century physicist Nikolai Kozyrev.

Essentially, Kozyrev devised reproducible experiments that prove the existence of a torsional energy field beyond electromagnetism and gravity, which travels much faster than light. He called it the flow of time. Others, Einstein among them, have called it ether. Others call it zero point energy.

Within this â€œflow of time,â the past, present, and future all exist at the same time, and in every place. This discovery sets the stage for all psychic phenomena to be scientifically explainable. Trofimov and Kaznacheev have, for the past thirty years, been experimentally developing the practical explanations, and have made some surprising discoveries.

When I visited Trofimov’s laboratories at the International Scientific Research Institute for Cosmic Anthropo-Ecology in Novosibirsk, where he is general director, he enthusiastically showed us his two main experimental apparati two hollow, metal, person-sized tubes, equipped with mattresses and drinking water.

The first, dubbed Kozyrev`s mirror, reflects thought energy (which exists within the flow of time) back to the thinker. This apparatus, invented by Kozyrev, gives access to intensified consciousness and altered states, including non-linear time similar to a deep meditational state.

Trofimov’s work has consisted of remote viewing experiments across both distance and time. They discovered that results are more positive when the sender is in the far north, where the electromagnetic field is less powerful. So they invented a second apparatus that shields an experimental subject from the local electromagnetic field. Within this apparatus, their subjects can reliably access all place and time past, present, and future instantaneously. Construction specifications for these apparati are published in Russian scientific literature. 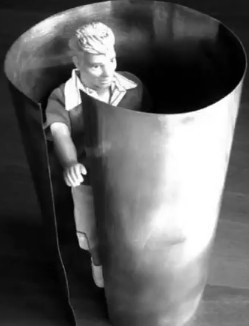 Among Trofimov and Kaznacheev’s conclusions are:

1) our planet’s electromagnetic field is actually the veil which filters time and place down to our everyday Newtonian reality enabling us to have the human experience of linear time,

2) in the absence of an electromagnetic field, we have access to an energy field of â€œinstantaneous localityâ€ that underlies our reality,

3) that the limiting effect of the electromagnetic field on an individual is moderated by the amount of solar electromagnetic activity occurring while that person was in utero, and

4) that once a person has accessed these states, his or her consciousness remains so enhanced.

The implication is that the global electromagnetic soup of cell phones, radio, television and electric appliances actually impedes our innate communication abilities. The further implication is that expanded human consciousness is mechanically producible now, which raises the vast ethical question of how these apparati can be most beneficially used.

Carol: Alexander, why did you begin doing research in this field?

Trofimov: I very clearly remember the moment. It was March, 1975. After my post-graduate education, my first expedition as junior scientific researcher was to Dixon a small village in the far north, which is located above 73 degrees latitude. It was to study adaptation of human organism to the conditions of the far north a great experiment of U.S.S.R. Academy of Sciences. I worked with Kaznacheev, who was the creator of the civilian department of this Academy. I began my investigation as a cardiologist, studying the reaction of the cardiovascular system and the importance of different magnetic conditions.

I continued my investigation as a doctor, and from approximately 1990, with Academician Kaznacheev, we began new cycle of work â€” the study of cosmic consciousness. Let me show you Kozyrev`s Mirrors. This apparatus is the grandfather of Kozyrev`s Mirrors the first generation. Now we have seven generations. Carol: But why is this called a mirror? Where is the mirror? 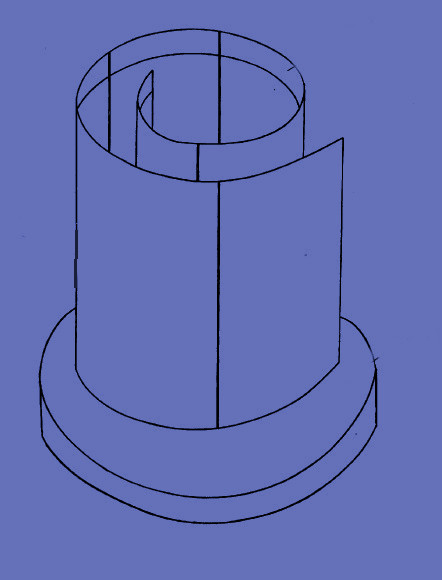 Trofimov: We use the law of optical reflection which also applies to streams other than light. When the surface is curved, according to this law, the energy is focused.

Kozyrev was also an astronomer. He created a small mirror to put inside a telescope, which he focused on one of the stars. And he programmed it for three times: one year in the past, the present, and one year in the future.

Carol: And how did he program that?

Trofimov: He simply calculated, using some mathematical methods. He had the know-how to calculate where it was, where it should be, and where it is its projected location. So he realized that the star is present everywhere in the past, present, and future.

Carol: But that is common knowledge. What was the discovery?

Trofimov: We wanted to prove it in a scientific way. Kozyrev proved it in astronomical terms. Our task was to prove it in biological terms. So the legacy of Kozyrev was that, if people could create such kinds of apparatus that are capable of creating density of the energy of time, from this point they could have the opportunity to visit any place in the universe.

We created such an apparatus, and called it Kozyrev`s Mirrors. It takes the energy not out of the stars, but out of the human being being a star. (Carbonaceous life forms, such as those on Earth, are one stage of a star’s evolution.) And these streams coming out of human beings, they are not allowed to go everywhere in the space, but they are concentrated here, creating this density of the streams of time and energy. But a human being should be specially prepared, and when he spends some time inside, he finds himself in a particular state of mind. He can travel to any part of the planet. And there is a special ray enabling him to be in this or that part of the planet. We used this kind of apparatus for our experiment for distant communication with Dixon.

Basically, there was a person inside the mirrors who was given symbols that he was supposed to project, and there were people all around the world who were supposed to receive.

Carol: Were they also in mirrors?

Another interesting detail: the people who were receiving the information were asked to simply switch on their television, without even sound or images, but just power, and it gave the opportunity to receive this information more effectively. So this space around the planet, and television and radio space interrelate. And they approached the world with special precautions so that people would know the interrelationship of space and radio waves. It was very important. So, fifteen years ago, they made this research and realized these consequences.

Carol: Well, the whole planet is an electronic soup, with radio waves on all frequencies.

Trofimov: Yes, exactly. So, to the next room. This is a cosmobiotron clinical device. There are two here the only ones in the whole world. Inside this apparatus, the electromagnetic field is reduced almost to nothing, which allows us to go anywhere in space. Just to be free, out of the magnetic field of the earth.

Carol: How does it do that?

Trofimov: Inside this shell are several layers of a special steel called permalloy that has magnetic receiving qualities, that is sensitive to magnetism. Inside the tube, the magnetic field is diminished 600 times.

Currently, the Earth’s magnetic field has 49,000 nano-Teslas. It has been decreasing by about 50-70 nano-Teslas per year. By the end of the millennium, weâ€™ll have only 100-200 nano-Teslas. So, this apparatus allows us to emulate the situation that we will have 1000 years in our future.

[He sat down on the open end of the tube]. Where I’m sitting now, the magnetic field is how it will be on Earth in 100 years. As I move further into the apparatus, the magnetic field is decreased, as it will be on Earth further into the future. We measure the results every 15 centimeters, which is equivalent to 100 years. In a thousand years, we will be somewhere in the middle of this apparatus.

This apparatus is the most important research instrument for assessment of the evolutionary consequences of the fluctuation of Earth’s magnetic field.

Carol: What is the result of that diminished magnetic field?

Trofimov: As the force of the magnetic field is decreased, the sun’s energies will penetrate more.

Carol: So the magnetic field protects us from the solar rays?

Trofimov: Yes, and also cosmic rays galactic protons, for example. The less protection there is, the more particles can reach us.

Carol: Is the ozone layer a different mechanism?

Trofimov: Somewhat different. The ozone layer filters only the ultraviolet part of the spectrum. 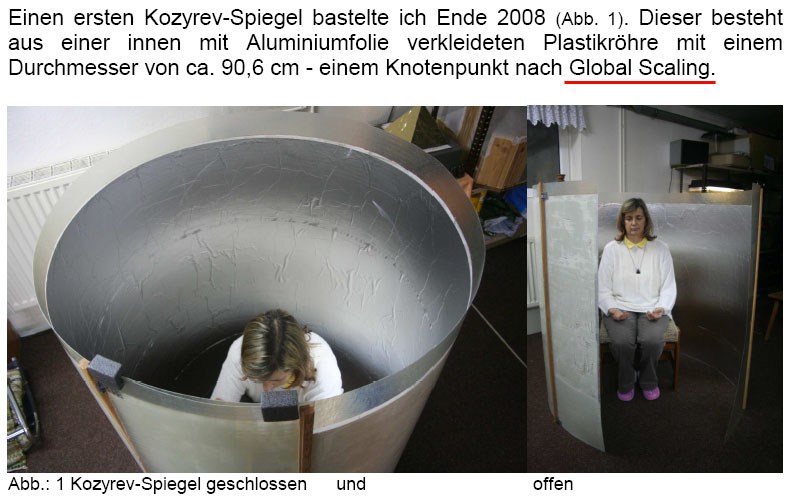 So we have a profound opportunity to really emulate what will happen with any living creature or human being, century by century how we will co-exist with these energies from space. What will happen? Either our mind reserves or extra abilities will open, or on the contrary they will be limited, and some catastrophe will happen. So basically, this is a like a theatrical stage, where we can see how the fate of human life will play in a thousand years.

We have been working more than 15 years, so we do have results. Part of our results have been published, and we are preparing to publish more.

Now I will say something important. As we investigate brain activity either with an electro-encephalogram, or by assessing brain functions like intellect level, memory, and other functions, we realize that we currently use only 5% of the capacity of our brains throughout our whole lives. And then, after we spend some time inside the apparatus in a space without magnetism â€” we repeat the same tests, and we see a drastically different picture. We see that our mind’s additional reserves and abilities are activated. We see an increase in memory capacity, increased IQ, and changing zones of electric activity of the brain.

Carol: Is this because of the reduction in magnetic field?

Trofimov: When the magnetic field is decreased, we see an increasing ability to use the reserves and capacity of the human brain, and that’s good. But there is still a question of whether it is good for everyone. How quickly should these reserves be opened in real life, and for what would these resources be used. Why should we access these resources? What is the practical use of this opportunity? Just opening the resources is not a panacea.

We need a scientifically rigorous forecasting model not a purely theoretical one about what will happen with us, and how this knowledge can be used right now to educate. For example, how long should a person be inside to increase his memory capacity without waiting a hundred years. We are now doing practical research on how to make use of this phenomenon.

Thereâ€™s another important point. When a person is inside, his brain function is in direct correlational dependency not only with solar energies, but with galactic rays. So we thereby open a request for information from the galaxy.

We believe that this is the mechanism by which cosmic human consciousness is currently being opened, with the decreasing electromagnetic field. This shift is opening people’s cosmophile properties properties that we are lacking right now in this â€œcosmophobeâ€ world. But we cannot bring the whole of humanity onto this cosmophilic life-raft, because we are only in the experimental scientific stage that allows us to make a forecast and back it up experimentally.

So what can we do? For the survival of our civilization, we have to foster the cosmophiles. And for this, we need to open these resources. While we can give people this possibility, we cannot order or force them to be cosmophiles. We need a well-coordinated system to guide people to this source.

Alexander V. Trofimov, MD, is General Director of the International Scientific Research Institute for Cosmic Anthropo-Ecology (Institute of Cosmic Anthropoecology), which was founded in 1994 for scientific investigation, and is located in Academic City, Novosibirsk, Russia.