“Od” is a manifestation of the aether as discovered by Baron Karl Von Reichenbach.

This simple motor is a worthy experiment and this is the only information we have been able to find on it. Those daring enough please take the plunge and report your findings.

In the book “The Inner Earth” by Doreal, he mentioned that there are 144 separate and distinct types of magnetic current. The Ancients called this sub-Pranic or sub-aetheric, which can be used for superhuman powers and levitation or for control of the mind.

The following is a description of how we make a machine to allow anyone to work with each of the individual magnetic currents.

In the book “Vital Force” by Baron Charles von Reichenbach, he shows the chart of these forces: 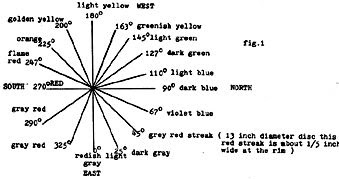 Take a metal disk and put the N or S pole of a magnet in the center. Then place the disk horizontally. Use a compass to line up the dark blue at 90 degrees and red at 270; then you can map out the rest of the lines.

If you can see magnetic auras then you will not need a compass.

Fig. 2 shows how to make a very powerful magnetic spectrum device. The 44-inch diameter disk is made of 10:0:8 soft annealed steel approximately 3/16 inch thick. Between them are placed 16 to 28 ceramic magnets approximately 2 inches in diameter, with a hole in the center and magnetized with the poles across the faces. The blue pole is placed under the top disk and the red pole is placed down on the bottom disk. The top and bottom 2 to 4 magnets are placed so their poles repel, but when put on top of the metal disk they will still attract to the metal disk so as to compress the field out away from the center to the edges of the disk. A brass or copper tube is forced through the holes in the magnets to align them and give them support. A plastic stand or motor is used under the bottom plate. 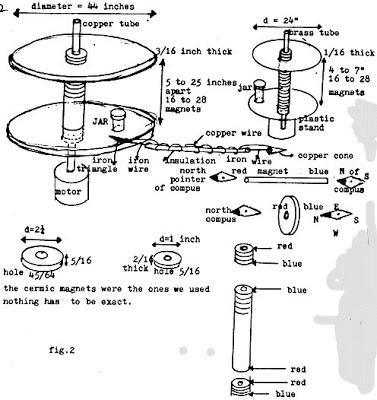 An iron triangle was placed on one of the disks to draw off the color to work with it. The width of the triangle helps to draw off more or less of the colors nearby. The triangle is connected to a copper and iron wire to draw off the energy you want to work with. The cone on the other end increases the efficiency. An iron rod can be placed at the edge just between the top and bottom so you can draw color from the bottom and top plate at the same time.

Fig. 3 : How the colors look coming out from the machine: very concentrated near the edge and slightly inside (Geographic N: dark blue ray)

As the distance between the plates is increased the separation of the colors increases and the stinging sensation increases to a point where it decreases with further separation.

A jar placed between the disks can be used to charge water or seeds in water. 2 to 4 hours are needed for good results. If the disk is turned slowly by motor or hand (every 10 minutes by hand), all the colors will fill the water. Seeds treated for 1 hour or longer showed up to 5 times as much root growth as compared to untreated. The disk is turned every 15 minutes. When you use the red or blue pole of a magnet you still have the complete rainbow in each color. Now as with color therapy you have each color at your command and it is already in its aura form which makes it more effective and potent than the aura which is attached to color.

On the back of most old TV picture tubes is a gray ferrite collar over copper wire. Remove them and place 2 or more over the copper tubing on the top disk. With three of these ferrite collars the odic field coming from the area between the two iron disks will be extended 10 to 100 times.

Our guess is that the field of energy may be equal to a 16-layer Reich accumulator, but it is of Od (cf. von Reichenbach) rather than Orgone.

When a person sits in an orgone accumulator his body generates a larger aura. When that person puts his hands near the odic disk the orgone aura collapses and a new aura appears that seems different from the orgone aura. Carbon seems to be able to break orgone into its different colors. Reich found red and blue energy under the microscope, and between red and blue is a rainbow.