Thoughts on Electricity, Magnetism, and the Vortex by Caleb Thomas

“First be an electrician. Know the electric current if you wish to control people, matter, or your destiny.” -Russell

To start… I am not an electrical engineer nor have I studied this type of engineering(actually glad that I haven’t been tainted haha).

I just wanted to bring up some interesting correlations for the chemical elements and talk a bit about electricity and magnetism.

So before I go into it, I want to talk about the word “magnetism“.  I subscribe to the fact that this is an electric universe.  With electricity being the sole worker and what we experience as energy is the expression of electrical tension and electrical potential from polarity, and strains of motion.

So “magnetism” and “magnetic fields” are just used here as a label of an electrical action.  It is a helper for others who are new to this etc…  It is an electrical effect and piece of the cycle as a whole.

These 3 things rely on each other, interact, and have a measurable ratio.

Consider a water tank at a certain height above the ground.  At the bottom of this tank there is a hose.  The pressure at the end of the hose can represent voltage. The water in the tank represents charge. The more water in the tank, the higher the charge, the more pressure is measured at the end of the hose.  We can think of the amount of water flowing through the hose from the tank as current. The higher the pressure, the higher the flow, and vice-versa. With water, we would measure the volume of the water flowing through the hose over a certain period of time.

With electricity, we measure the amount of charge flowing through the circuit over a period of time. Current is measured in Amperes (usually just referred to as “Amps”).

In my studies I’ve come to know the electric current to be different from the common view.  So I’d like to go over some of these observations, how they relate to my studies, and the chemical elements.

Let’s begin again and look at the 2 ends of the wave or cycle.  The wave begins with polarization and motion from an equilibrium or stillness created by lenses and caused by wave interference (see here).  Just as sound springs from silence when a string is struck.  Once motion begins this polarization process and creates the 2 opposite sides, they are forced into compression in the centripetal vortex that is also created(for another time).

The 2 ends are “sexed” or one side father and other side mother.  They can also be labeled with a color.  Red for father and blue for mother. 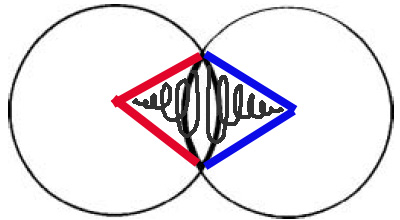 As you can see in the above image…from the wave interference the vesica piscis is created or a convex light lens.  From the center plane the vortices extend towards the focal point on each side.  ( my wife wanted me to add that this is not an X rated image of a woman’s bits  :-p )

The centripetal, compressing, charging, living, spiral is the growth or life end of the cycle.  Like compressing a spring.  The father and mother lights both travel in the centripetal direction and are both charging.  {if you are a student of Russell this can be debated…but I digress…}

“That which man calls “voltage” is the increasing displacement. It is heading northeasterly, against resistance, in the centripetal direction of all charging systems.”- Russell

Once the cycle reaches its maximum compression, it must now die.  The “death” cycle is just the return home to the stillness.  It is the expanding, discharging, dying centrifugal vortex that unwinds the spring.  Uncompresses or releases it.

“That which man calls “amperage” is the increasing replacement. It is heading southwesterly, with assistance, in the centrifugal direction of all discharging systems.” -Russell

So here we are able to match the 2 opposing cycles and vortices to the electric current!!  How does this help us?

Well…If we look at all matter as rolled up light or compressed light, and what we see around us is just different conditions of the same thing just located in different pressure positions… then there has to be some measurable ratios that can help us understand.

Also there has to be measurable voltages where the elements reside in different octaves.  Octaves of different pressures.

These ratios would be the inverse square, square, inverse cube, and cube law.  (another post another day)

There are also ratios that I’ve mentioned in previous posts with the cosmic clock and formula of locked potentials.
0-1-2-3-4-3-2-1-0 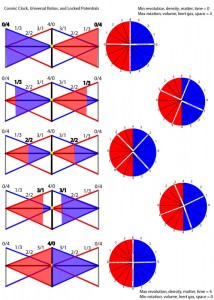 We know that most of the time to have a high current, we need to increase the voltage.
So to increase the centrifugal expanding death cycle, we must first have voltage or LIFE!

We know that current seems to be the most dangerous to humans…and current is the death cycle.  So now we can see why.  Because the current quickens the death cycle of our cells etc…

If you prescribe to the theory that electricity travels around the conductor like I do, then where does the resistance come from?
Well it comes from the interactions of these 2 vortices interchanging and interacting.

Magnetism: is a class of physical phenomena that includes forces exerted by magnets on other magnets. It has its origin in electric currents and the fundamental magnetic moments of elementary particles. These give rise to a magnetic field that acts on other currents and moments. (from wiki)

I won’t go into the Coulomb Law or my disagreement with it here.  But what is called Magnetism seems to be related to certain types of materials and certain types of metals and how they interact with certain fields.

If we divide the chemical element chart into 2 sides we would start to see some interesting things. 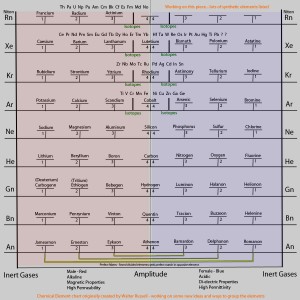 On one side we have magnetics like iron, scandium, yttrium, aluminum(high permeability)
On the other side we have dielectrics like phosphorus, tin, nitrogen(high permittivity)

So the dielectric materials have a high permittivity which allows for them to have a better electric field.

And the magnetic materials have a high permeability which allows for them to have a better magnetic fields.

Ok so we need to ask… what is used to create the best magnetic fields?  CURRENT.  High current creates the best and strongest magnets.  What is current?  Centrifugal, unwinding, death part of the cycle.

Now we can tie it all together and see that what we call magnetism is just the electrical effect of the decay, death, unwinding cycle and that electricity is all there is.  We can also show how the chemical elements relate to pressure conditions, electrical potential, and wave!! 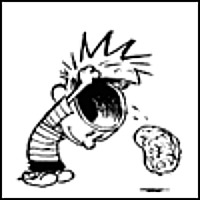 I know this was probably hard to follow.  So I apologize for it being scattered… but I wanted to put a brain dump on here while I was working on some things.  Peace and much love!!