It is indeed a rare thing that we should not only witness her beauty, but wholly embrace the visage of that divinity we baptize as nature. As the naturalists sought out the qualitative in life, so the fundamentalists of science tried ever to define nature’s character in quantitative analysis. Herein lies the elementary problem concerning chaos theory.  For a time,  I found myself disregarding chaos theory altogether, owing to the fact that I regarded myself as one whose mission was to sustain that which could be rendered life-giving, and to slight all that was not.  Finally, it was time to investigate what all this nonsense was about.  Of course, within this investigation, I would adhere to my subjective intuitions. 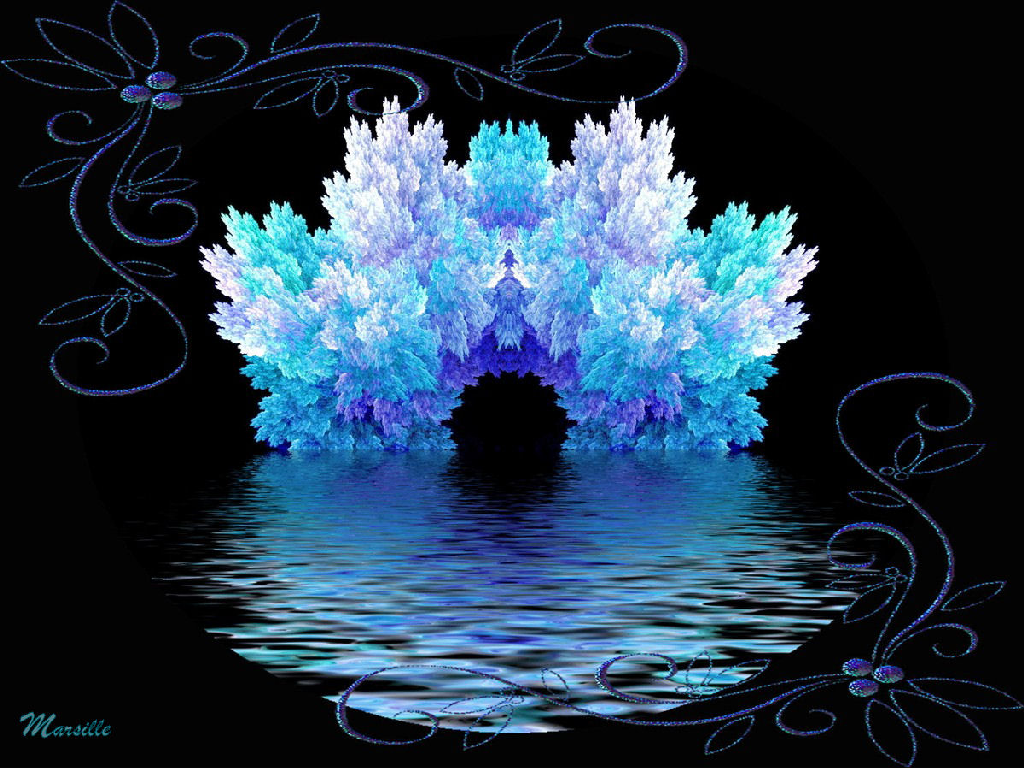 The idea of chaos theory is that a seemingly random (chaotic) function displays periods of order, and that these episodes of periodicity will be self similar; that is, in perfect relation to one another (without delving too far into the history of this so-called “chaos” I will explain some of the high points in its association). A fine example is known as the “bifurcation” which has been used as an illustration of population growth and has been studied by many biologists. Consider a time line, insert the right formula, and geometrically you have a representation which exhibits stable and unstable regions of growth. The interesting fact is that the stable regions appear in a perfectly ordered fashion, contrary to what is expected. Again, the problem with the theory is that one may think that order has been created out of something appearing to be chaotic, but in reality there is nothing but an already ordered system which has subtly revealed itself. A contradiction. Alas, this is the way with nature – or is it?

It was Benoit Mandelbrot who came up with the term “fractal” and it is his efforts that have brought the whole science of chaos theory into the spotlight. His paper entitled, “How Long is the Coast of Britain” opened up a new avenue of thinking in the mathematical and theoretical sciences. This idea of just how to measure the coastline would naturally depend upon your viewpoint. But, Euclidean measure could do no justice to the demarcation of irregular shapes and this is where one must turn to the perception of dimension. Many were quite familiar with this concept including such early pioneers as Charles Proteus Steinmetz who expounded on the nature of space in relation to projective or hyperbolic geometry and the theory of relativity.  If dimension altogether relies on your point of view, from what distance does one measure an object? Advancing from the macroscopic to the microscopic levels of perspective, one will begin to perceive certain definable details, and although reminiscent of the whole, display a quality of irregularity and immeasurability. An infinitude in either case, if you will. Through his studies of irregular patterns in natural processes, Mandelbrot happened upon the quality of self-similarity. This new geometry was to be hailed as nature’s own.

Anyone who has seen a fractal has seen the now famous Mandelbrot set. The formula for its creation is quite simple; take a number, square it , and add the original number (z^2 + c). The process is then repeated indefinitely with the iteration being either rational or irrational. Those that are rational become a part of the “set” and those that are not, do not. With the magnification of the set, the self-similarity reveals itself by displaying a replica of the  original. It is an extremely complex and beautiful form developed out of a very simple formula. 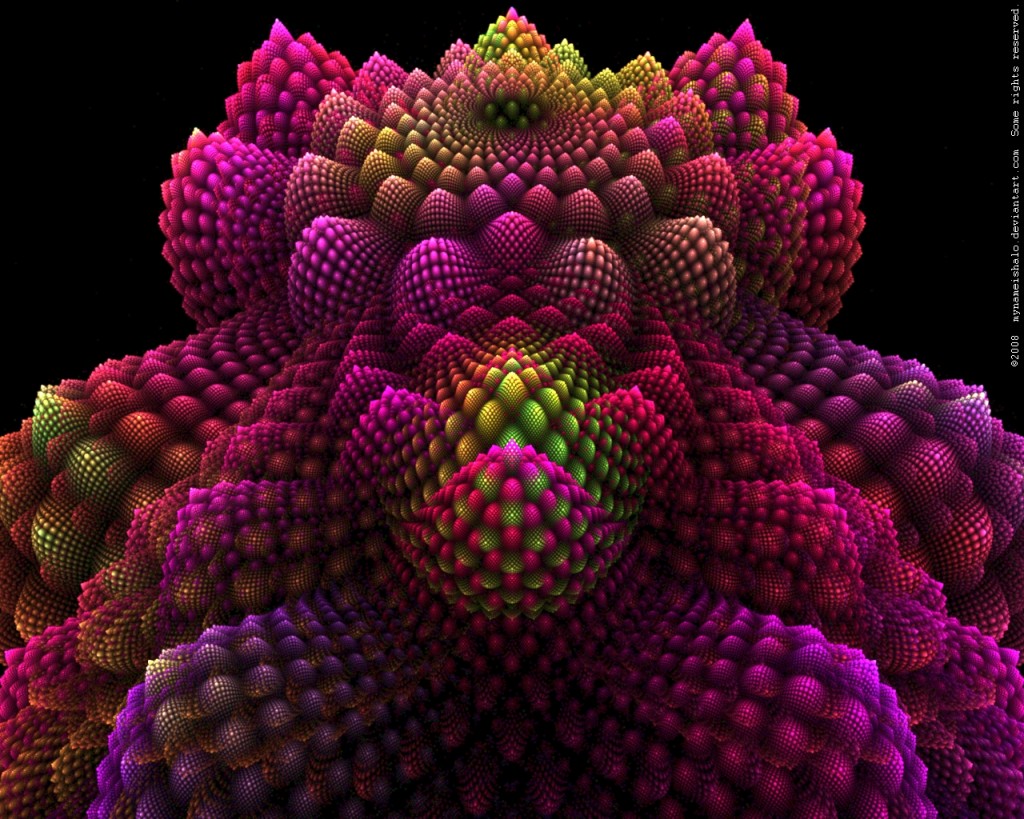 But, what about a fractal’s relationship to nature (or using the new science term “dynamical system”)? The difference is that when nature forms something it follows a general rule called the “Golden Section.” Some have tried to define this “irrational” number as just that – a number. More correctly it is a ratio, not an endless number string. Pi, Phi (the Golden Mean), the squaring of a circle, and other mathematical conundrums of so called irrationality have kept the quantitative theorists methodically labouring for centuries with no answers in sight (but probably keeping them employed). Phi, as an irrational number, may be familiar to most in the form of 1.6180339…etc. The more appropriate geometric representation is: sqrt (5 + 1)/2. This function shows itself repeatedly in all of nature and has thus been deemed an intrinsic component of what has been referred to as “Sacred Geometry”. From the phyllotaxis of plants (their spiraling arrangement of leaves) to the Nautilus shell, the Golden Section or sacred geometry is found throughout all growth in nature, and has been dutifully emulated by both ancient and modern artist in sculpture, architecture, and music.

In order for the fractal idea to model nature’s processes I felt it necessary to insert the Golden Section into the established formulas for experimentation. In the initial stage of the experiment I added the sqrt (5 + 1)/2 and sqrt (5 – 1)/2 to the extant z^2 + c formula (where c actually became the Golden Section) and was not completely surprised to see the patterns of growth exhibited by the Nautilus shell emerge. Most showed the characteristic self-similarity described by the modern chaos theorists. Continued manipulation of the formula (z^3 and z^4) produced the resemblance of the reproductive organs of both female and male respectively.  Here, in deep magnification, the issuance of  spiralling forms would reveal a striking similarity to the vortexian mechanics of flowing water and galactic streaming so important to Wilhelm Reich’s theory of cosmic superimposition. But, what I found most fascinating was that upon extreme magnification, these implosive tendrils of form experienced periods of orbital irregularity. At once these spiralling shoots would appear to be gravitating toward a common center but then in certain instances would sprout new shoots not following the typical orbital pattern, as though they had found a new source of entrainment.

Through successive manipulations of the basic formula using the Golden Section, I arrived at a form appearing to have no self-similarity up to the highest magnification possible. It is the imperfection of this coastline” form which reveals a part of the genuine beauty of nature. This would naturally be true chaos, if indeed it is correct. What is interesting in the most qualitative and subjective aspect of nature – is that there is a seeming chaos in which her processes work. For instance, a typical IFS (Iterated Function System) fractal – one that utilises self-similarity to create objects somewhat resembling plant life – in its generation, is perfectly formed. However, in nature, the formation of plant life most often produces anomalies in character which do not typically follow the self-similarity code. The same error proves true for what are known as L-Systems fractals. These were developed in 1968 as a method for modeling the growth of living organisms. The mathematical processes involved with these fractals mechanically instruct the computer how to generate the image and really have no relation to the growth of anything living or dead. Only by the inclusion of Golden Section geometry into the formulas are we to gain anything resembling the structure of nature, and dimensionally, these images are still quite lifeless. Only the motive properties of projective (hyperbolic) geometry will produce the growth factor into Golden Section geometries and this brings about the limitations inherant in computer generated iconography. This does not mean that something cannot be gleaned from researching the fundamentals of form through the use of computer generated images. The intricacies of these Golden Section images are in themselves a portal through which we may understand nature’s dynamical systems more closely, but we must remember it is certainly not the complete picture. That the orthodoxy of science would represent nature with such mechanistic examples like the L-Systems and IFS models, is typical of their emphasis on a purely quantitative examination of nature. Nowhere can we define nature with such finite and rational constants, and nowhere are we to implicitly “order” chaos. Nature has defined for herself what is to be order and what is to be chaos. The two are inseparable yet distinctly separate entities.

I feel that the idea of the so-called “chaos” theory is of great importance in understanding certain basic functions of mathematical concepts such as self-similarity, but more importantly we should include the non-Euclidean geometries associated with spatial perspective and growth in the living. The inappropriate expression “chaos” would seem to be another avoidance of  “nature” by those bound solely to quantitative analysis, but this should not limit those with a desire to understand quality as well as quantity in all “dynamical systems”. That nature works on defined geometric principles is undeniable. It is therefore undeniable that nature’s geometry be included in “chaos”.

;Please note that the file below is set up to run with the fractal-generating application, “Fractint” and needs no modification.

;All of these formulas are based on the Golden Section or Phi as it is found everywhere in nature. Exhibiting true patterns of growth, these are

new to the genre and have many interesting characteristics not found in the “secular” world of fractals. Enjoy.

Michaelbrot(origin) {;based on Golden Mean