The phenomenon of Static Electricity has been known since ancient times and was the subject of discussion by the Greek philosopher Thales as far back as 600 BC and was of keen interest to eighteenth and nineteenth century scientists such as Francis Bacon, Benjamin Franklin and Faraday. Dynamic electricity, involving the flow of an electric current through a wire on the other hand has only been known for the past one hundred and twenty years or so. 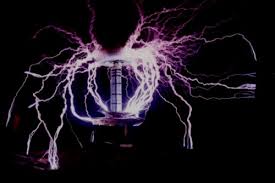 An electric field is the force that fills the space around every electric charge or group of charges. Electric fields are caused by electrical forces. Electrical forces are similar to gravitational forces in that they act between things that are not in contact with each other. Separation of electric charge results in different types of electric fields, since a charged object may be physically separated it is possible to study positive and negatively charged objects and the fields they generate:

The study of electric fields is important to Gestalt Aether Theory which states that the lines of force represent the alignment of the ‘virtual photons’ of the Aether. If this is so, how is the presence of an electric field explained when no photons are being emitted and absorbed to account for the presence of the lines of force ? The answer is that when a difference of potential is established across two points separated by a dielectric a region of stress is created in the dielectric between the two oppositely charged points. The ‘virtual photons’ of the Aether line up in this region of stress within the dielectric giving rise to the ‘electric’ field.

Perhaps the term ‘electric’ field is misleading because it seems probable that it is only the magnitude of the charges involved in the two cases  that are different. In the case of static electricity the amount of charge involved is extremely small compared to the amount of charge involved in dynamic current. For instance the most powerful Van de Graff generator that is capable of generating 10 million volts might have a total charge of only a quarter of a coulomb of electric charge. Otherwise the electric field is identical to an electromagnetic field. Look at this diagram:

This would be an acceptable explanation if not for the fact that in the experiment above it is shown that the ‘electric’ field is actually an ‘electromagnetic’ field, otherwise iron filings would not line up along the lines of force.

How does a current flow? In the simplest circuit a wire is attached to the terminals of a battery with a resistance in between. The wire allows the passage of electrons between the positive and negative terminals and a current is established. However, Gestalt Aether theory has shown that it is not the electrons that carry electric energy but photons. They are able to do this by free electrons in the wire emitting and instantly reabsorbing photons in a way that does not disturb the Laws of Conservation of Momentum and energy. This process gives rise to the lines of force around a conductor which are therefore a manifestation of the ‘virtual photon’ Aether that permeates the Universe.

Similarly the lines of force in the electric field within a capacitor are lines of aligned ‘virtual photons’ of the Aether, the electrons comprising the difference of potential are prevented from emitting photons by the presence of the dielectric but are in an excited state having absorbed a photon. The circumstances prevalent when a capacitor is connected in the circuit allow electrons to absorb photons because the energy is transferred to the lines of force in the dielectric in the capacitor, thus no contravention of the Laws of Conservation of energy and momentum take place. When the difference of potential is removed the photon is emitted along the lines of aligned ‘virtual photons’ and a current is briefly established. If the frequency with which the process is repeated is increased a steady AC current is seen, which is dependent of the frequency, voltage, capacitance and current in the circuit. 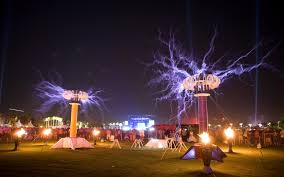 In the final analysis there are no qualitative differences between ‘electric’ fields and ‘electromagnetic’ fields, except for the fact that ‘electric’ fields result from a difference of potential caused by small amounts of charge while electromagnetic fields result from difference of potential caused by large amounts of charge. Also ‘electric’ fields can contain open lines of force since charges can be isolated. Thus a negative charge can be isolated giving rise to a negative field and similarly a positive charge will give rise to a positive field. Lines of force will only manifest when two charges interact. But there are no physical differences between the two fields they are both electromagnetic fields.