Radiesthesic Radiations are not Electromagnetic by Enel

Chapter III of “Radiations of Shapes and Cancer” by Enel

It is around a hundred years since the Baron Reichenbach made the discovery of radiations that he named Od. These discoveries can be
considered the first stone placed in the foundation of the new science that is now called radiesthesia. The experiments of Col. de Rochas are the continuation of those of Reichenbach’s work. Both have proved the existence of radiations emitted by living beings as well as by inanimate objects. These radiations are polarized, that is to say, positive or negative.

Reichenbach. as well as de Rochas use sensitive subjects for their experiments, who, having been put in the state of receptivity, see the
radiations as a sort of luminosity, red for the positive and blue for the negative.

Each pole of a magnet emits radiation corresponding to its polarity.The human body is positive (red) on the left side and negative (blue) on the right. The female is the reverse.

A disequilibrium or an illness translates itself, in our opinion, by a failure of either a positive element or a negative element. One succeeds at reestablishing equilibrium by strengthening the failing element or by diminishing the action that has caused the failure. Reichenbach. like Rochas considered the nature of these radiations as being distinct from electricity and magnetism. Reichenbach called them “OD”, and Rochas, who was essentially interested in the study of these rays in relation to the human body, called them “sensitivity”, or “motoricity”. In a series of very interesting experiments, he succeeded in exteriorizing this force and in impregnating, so to speak, certain elements, mostly liquids. I refer the reader back to the work of these experts for these interesting subjects. He will find there a detailed expose of these discoveries. 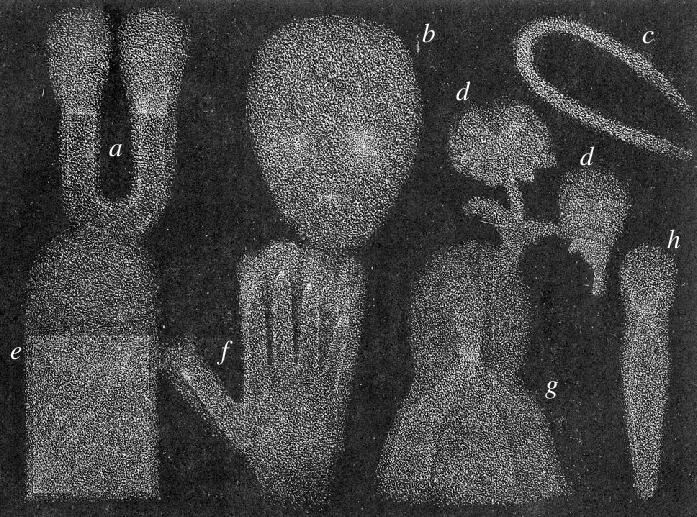 This state of affairs continued to the point of death, until the end of the first World War, and now we have forgotten the discoveries of Reichenbach and de Rochas. It is thanks to the development of radio broadcasting, stimulated by military necessities, that serious study of radiation and waves began. They discovered the possibility of transmitting waves over great distances and the use of carrier (Hertzian, after the discoverer) waves.

The vibrations that we now call radiesthesic were studied and classified by application, by analogy, certain laws regulating radio. Those
who worked in this domain observed that, whatever obeyed certain laws discovered for radio, radiesthesic waves were of a different nature. This is why they needed a different name to distinguish them from electrical waves.

Different terms were proposed to define this newborn science. Certain people called it “rabdomancie”, others, “Tellurie” deriving from the name of the rod (rabd) or from the radiations emanating from the soil. The English call it “dowsing”, a word that corresponds to “sorcerer” in French. But none of these names were satisfactory because they only defined a portion of the new radiations. It is true that dowsing first gave us the idea of unknown rays rising from the earth. But it was quickly discovered that it was not only water or the earth that gave these radiations, but each object and each being radiates around himself different waves than those known and classified as electro-magnetic. It was then that the name Radiesthesia was proposed, which defined these waves in a more general fashion. Although the name was no more explanatory, it was accepted, nonetheless. In the meantime powerful experiments unveiled the nature of these unknown rays that seemed to play the most important role in the universe.

Some consider that the rays are cosmic rays that have been captured by the pendulum. I am not going to express my opinion on the subject because I have not yet formed one. The only thing that I could confirm is that radiesthesic radiation is not of the order of electric, nor magnetic. These waves accompany, so to speak, the electric currents, and they have something in common with magnetism. 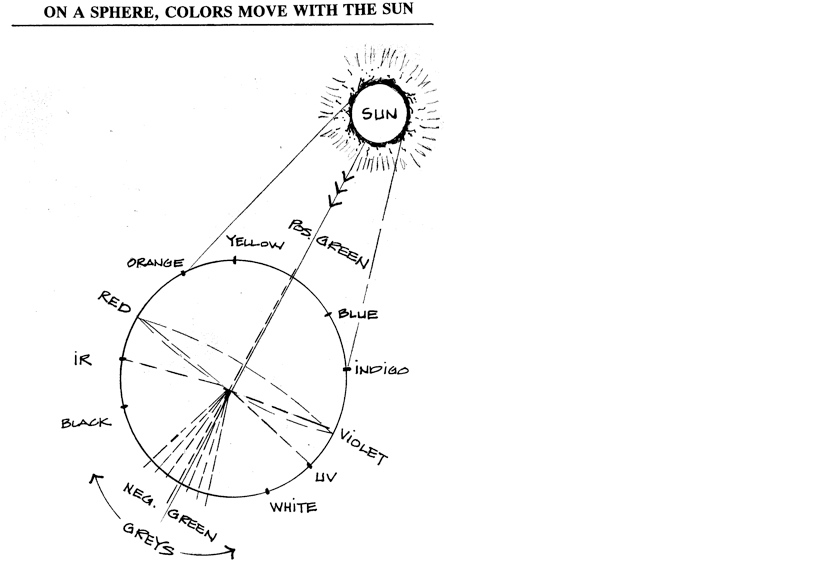 |Footnote: This force (the OD) has its own existence, independent of magnetism, even though it would never be free of a certain connection with the OD.]

In First Steps I have said that one could observe radiesthesic rays at an electrical outlet to which is attached a simple string that transmits them. But since then I have been able to observe, according to my personal experiments, that not only could one do without the electric cord, but also that the proximity of electric current had a rather injurious influence on the radiesthesic wave. These observations and numerous experiments have proved that the conductor of these waves is clearly not electricity. An insulator for electricity is a conductor for radiesthesic waves, and what conducts electricity is an isolant or more or less a filter for radiesthesic waves. By fixing a non-conductive wire to an electrical socket, one obtains radiesthesic radiations that pass not by the electric wire, but by its isolant. And it is not the source of electric current that engenders them, but they originate directly from the earth. Thus it suffices to fix a non-metallic wire to a wall and far from an electric socket, in order to observe the presence of waves using the biometer. These vibrations respond simultaneously to all
the colors of the spectrum. This proves that the waves arise from the earth, and are conducted by the masonry of the wall.

On the contrary, when one fixes the wire to an electric socket, one observes that the ordinary (neutral) pendulum executes four movements in consecutive series: clockwise circling, swinging across the string, opposite circling, and swinging along the string. Then the series begins again. The total duration of the series of these four movements is 1 minute, 14 seconds. Further, if one moves the pendulum along the string, one finds that from time to time there are points along the string where the pendulum stops its series movement in order to swing across. These points repeat every 17.5 cm. and their length is from 3 cm. All this reveals the influence of the electric current, which creates a sort of intermittence in the radiestheisic waves because, when one attaches the string directly to the wall, nothing like it is produced and the string responds regularly to all the colors.

In order to be able to select a desired color in drawing on the force rising from the earth, I have made very simple instruments that make this selection by their particular shapes. I describe them in detail in the chapter on radiation from shapes. It is important that they be isolated from the work table, because otherwise there would be a drain of the “current”, the table being a conductor. To isolate the instrument, it is necessary to place it on metal. But experimentation shows that a support made of just any metal was not sufficient because the metal presents a filter that lets one single “color” pass, while blocking the others. Different metals filter different “colors”, so to obtain a perfectisolation, it is necessary to make the support of two different metals. For example, the base can be copper and the foot aluminum. One can judge the effectiveness of a properly-isolated instrument with the biometer. The number shows an immediate increase with a large increase of the selected and isolated wave in relation to the non-isolated wave.

Obviously anyone can easily verify that the radiesthesic waves are different from electricity. And it is for this reason that I consider all instruments of an electrical nature (amplifier, loudspeaker, etc.) that certain radiesthesists use as being not only useless, but dangerous. Any electric current can only confuse the issue for the experimenter because he cannot observe the effects of the radiesthesic waves in their purity.

The experiment with the string attached to the electric outlet shows the influence that electric current has on radiesthesic waves and proves that this influence tends to obscure it.

Concerning magnetism, I have also described in First Steps the way to amplify the radiation of a “color” using a horseshoe magnet.

It seems the eminent radiesthesists use magnets for their curative goals. I admit the possibility of using the magnet for certain afflictions, but
it is not the magnetism of the magnet that acts in these cases, but the “color” it emits. I have said that the North pole of a magnet responds always to Ultra-violet. Then, if the affliction needs this color in order to reestablish equilibrium, it is evident that the magnet can be used and will act with the quality of remedy needed in this case.

But it would be false to suppose that the powerful magnet would be a sort of panacea able to heal all illnesses.

And I repeat again one time, it is not the magnetism of the magnet that has radiesthesic power, but only the individual color, the mass, and particularly the shape of the horseshoe, to which we shall return in the  following chapter.

This was excerpted from Enel’s Book: “Shapes of Waves and Radiations” which can be downloaded here: http://bit.ly/320ZAOh